It’s no wonder that the apostle Paul has been on my mind a lot lately. This year in our home bible study group we studied Paul’s letter to the Romans and then went onto Acts. There we  refreshed ourselves about the story of Paul’s conversion from one who hated those who followed Jesus and The Way, to being a commendable and committed servant of Jesus. Taken together it is a story that shows how great a change Jesus can make in a person's life.

Last week at our end of term get together for bible study, we were asked what stood out most to each of us. For me it was one of two things. One is a little story tucked away in among all Paul’s journeys and exploits. It tells of Phillip and the Ethiopian. I love that story because it is so specific. Phillip is told exactly where to go. He is involved in ministry at the time, so it’s not like he’s been slouching around doing nothing. But he’s told to go on the road leading south and he does. There he meets, talks with and coverts an Ethiopian eunuch.

That story shows me how important it is firstly to listen to the Lord and be obedient. It shows how important one person, one individual is to Jesus. It may be there is one special person only you can reach, either through a one on one relationship or through your words. Sometimes all it takes is one sentence that reaches out and touches a person’s heart.

The second thing that stood out was how Jesus transforms a life. Paul initially thought he was helping God by getting rid of those he believed were a new sect.  The Lord Jesus made sure he got Paul’s full attention on the Damascus Road. From that point on Paul never looked back. He went on with the work the Lord has set for him to do. Imagine if he had started out and then decided it was all too hard, he really couldn’t hack it! Or if he wanted to do something less strenuous and taxing.

Now I’m sure if you’re anything like me, you think writing isn’t the easiest life out. It’s not like we just sit down at a desk and the words pour out. Well, most of the time, that’s not what happens for me. Occasionally it happens like that. When it does it is a gift. Even when it does it doesn’t mean I can leave it and think it is perfect. There is still research, revising, editing, proofreading that needs to happen. Then likely more revision, editing and proofreading and that’s all before it gets anywhere near a publisher.

Eventually it is ready to submit. Off it goes. Then begins the waiting period. I’m in that waiting period with one project at the moment. But that doesn’t mean I’m sitting doing nothing. I have moved onto the next project which had been started but put aside till the last one was submitted

Assuming the project does largely meet the publisher’s criteria and get accepted for publication, there’s no doubt more editing and proofreading to come. Still that’s not the end of the author’s job. There’s time spent trying to drum up interest, so when the book comes up out there will be an audience wanting to read the book. For many that might mean interacting on social media, organising a book launch, arranging interviews, and  lining up book signings or talks, when really all you want to do is sit down and write the new ideas and characters that are circling in your head. That promotion and marketing aspect is easier for some than it is for others.

At times it seems overwhelming. You might be forgiven for wondering why anyone would want to be a writer. I’ve wondered that at time myself. I still do when things don’t work as I would like. But basically if we believe God has called us to write, and my guess is we wouldn’t be here unless we believed that to be the case, then we can’t leave the job half done.

Whether we write Christian fiction, mainstream fiction, bible studies, devotional, children’s books, mysteries, romance or some other genre, we want to do the best job we can. It’s important to remember that God doesn’t call us all to the same type of writing. We have to keep going and trusting the Lord God will open the right doors at the right time and will help us each step of the way.


At the moment the jacaranda in my garden looks just like a lot of dead sticks. But I now it is not dead. In God's time it will bloom with flowers the most amazing shade of blue. 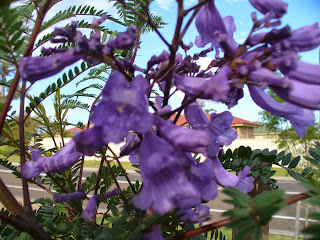 We need to be like that jacaranda and wait for God's timing for us to bloom. For some of us that may take longer than others and may seem it is never going to happen. That's when we have to continue to trust God. 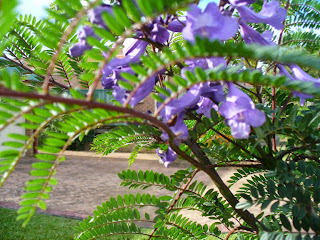 It also means He will pick us up and get us back on our feet if things don’t work out as we hope. Along the way He will teach us what He needs to and lead us into the next steps along the writing journey. The writing life is not for the faint hearted. It can be frustrating but it can also be a lot of fun. 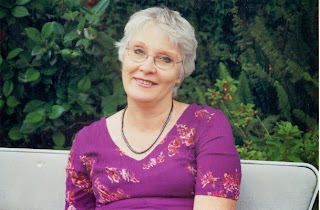 Dale writes fiction and poetry. Her latest novel is Streets on a Map is currently available as an E book. She has also written children’s books, bible studies, Sunday school material, devotionals, and articles about marriage, home and Christian living. She is currently at work on a new novel, tentatively titled Sandstone Madonna.
Posted by Dale at 05:00

Email ThisBlogThis!Share to TwitterShare to FacebookShare to Pinterest
Labels: Acts, different kinds of writing, Editing, getting the job done, Paul, Phillip and the Ethiopian, revision, Romans, the writing life, writing