My Brother's Shadows will inspire and trouble you. It will move you to grieve and pray, lament and celebrate, be angry and seek God, and finally to the sort of courage and faith Wayne himself so wonderfully displayed. I warmly recommend it to you.  - Dr Rod Thompson (National Principal/CEO, Laidlaw College)

Hayley was 22 years old when her brother Wayne, then 16, was diagnosed the leukaemia, cancer of the blood. Within a few weeks Wayne also contracted a deadly fungal infection in his sinus, which spread to his left eye and then into his brain. 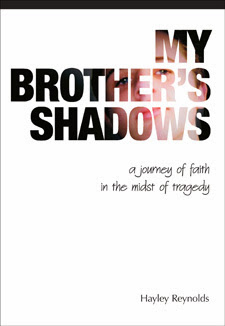 In this book, Hayley recounts the emotional journey she and her family took as Wayne fought his illnesses, before he tragically passed away 18 months later. It is filled with amazing courage and faith amidst pain and suffering, and finally points towards the ultimate source of hope itself
Dr Rod Thompson is not wrong in saying My Brother’s Shadows “will inspire and trouble you.” When a book follows one sister’s journey of faith through the trauma of losing her young brother to cancer, we can expect nothing less.

Hayley Reynolds examines the ageless questions of why bad things happen to good people, and why God allows some to be healed while others suffer and die. She wrestles with the inexplicable link between faith and healing, and the intolerable weight one must always ensure the other, when for Wayne and her family this did not pass.

As a mother of two sons aged in their late teens, I found this book especially hard to read. The unfathomable tragedy of losing a healthy child to unstoppable cancer was not a natural pull for me. But I needed to know more than the details of this courageous boy’s faith and battle for life. I wanted to know how his sister processed her loss after months of believing God would miraculously heal Wayne.

In the days before Wayne’s death, Hayley wrote; “Wayne’s illness had shaken my faith to its core and none of the normal Christian answers helped anymore.”

And yet, the harrowing final chapters of Wayne’s life open to Hayley’s discovery that God uses suffering to work in ways we cannot imagine. That He comforts as one whose pain matches our own.

Hayley’s fear her faith would be shattered by Wayne’s death, gave way to the life changing realization that even in death, especially in death, Jesus stood beside her.

I have one copy of My Brother's Shadows to giveaway to one ACW visitor. Leave a comment below to be in the draw. I'll announce the winner next Monday in the comment thread. 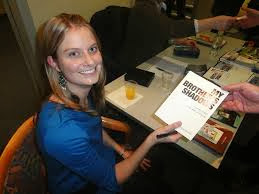 Hayley Reynolds completed a PhD in melanoma research at the Auckland Bioengineering Institue, The University of Auckland, NZ, before carrying out further research into breast cancer. She also holds a Graduate Diploma in Theology from Laidlaw College, Auckland.

Dorothy Adamek lives in Melbourne with her Beloved and their three gorgeous kids.
She's the winner of the 2013 FHL ~ Touched By Love Competition. Enamoured by all things 19th century, she writes The Heartbeat of Yesteryear, Historical Romance - Aussie style. Come say G'day at her blog, Ink Dots.