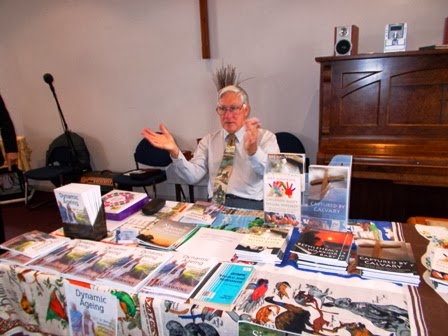 Yesterday, Thursday, I was in the Presbyterian Aged Care Home, Legana, Tasmania. No I wasn’t checking out a site for Mary. They had graciously allowed me to do a book launch for my ‘Dynamic Ageing.’ For me it was a very apt place to do this. I had been a chaplain to an Aged Care village in Maitland as part of my ministry with the Churches of Christ. I did this for 18 years. Some of my motivation underlying some of the Devotional material came from the wonderful residents of that place.

I Worked with Amanda Smith who is the Executive Assistant and Marketing Manager for the Home. She was a wonderful help. Cyril Hardwick, a resident welcomed me and Mr Andries Plotkins, Lifestyle Mentor for the facility, did the book review. He acknowledged that he was not a Christian but proceeded to give a very good and thorough review. It was refreshing to hear a man express how he wrestled with some of the biblical expressions or applications while appreciating the message of God’s care for the aged. The Moderator of the Presbyterian Church in Tasmania, Pastor Ian Partridge was the M.C. for the afternoon. He also ‘launched’ the book officially. Craig and Rachelle Hawkins provided some musical entertainment as he accompanied Rachelle in singing Wind Beneath My Wings, Rainbow Connexion and A Sinner Saved by Grace. Mary Hawkins closed the program by reading my poem ‘Too Old, Too Old? Too Old, Never!

The afternoon concluded with a nice afternoon tea. The Home provided tea/coffee. We supplied some savouries and sweets. All were greatly appreciated as it allowed time to talk, reminisce and sign books. As will be seen in a photo I had my books on display and was encouraged by the numbers sold. Approximately sixty folk gathered in the fine chapel and comprised residents, staff and invited guests. I’ve done other book launches and enjoyed them to varying degrees. However this one was extra special. The subject of the book and the folk represented gave me at least a real joy as they entered into the spirit of the occasion. The feet tapping and soft singing to the music Craig played and the songs by Rachelle which brought light to their eyes was simply grand. We had prayed that the Lord and His word would be honoured. Pastor Ian Partridge in his comments really did underscore this. I guess there are many times when we wonder how the words we have forged into a book impacted readers. Essentially that isn’t our province to worry about. We are called to be faithful before the Lord in what we have written, how it has been presented and that the book is honouring to Him. May our prayer be that those who read our writings will find the book has become a sacred space where Jesus Christ has turned up to say “HI!”

What a privilege Christian writers have to cultivate such sacred ground.
Ray Hawkins.
Posted by Ray Hawkins at 05:30