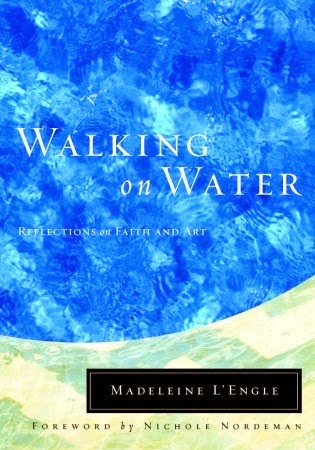 I remember the first time I read Walking on Water, Reflections on Faith and Art. It was an eye-opener for me – and a book I became completely absorbed in. Since then it has been read numerous times. It is one book of mine that has multiple paragraphs and sentences highlighted or underlined as well as pages turned down at the corners. Yes that’s shocking I know to some people but that‘s what I do when a book is a useful tool. This book certainly was for me.

Some of the pages are so highlighted, it is mostly all blue or yellow or whatever colour highlighter was to hand at the time. Much of the yellow highlighter has faded over the years but the message of the book has not faded.

This book, as the title suggests, in not specifically about writing as it deals with various forms of art. In it Madeleine L’Engle, one of my favourite writers, talks about the need of the artist to be ’obedient to the work.’ That means not being prescriptive about being in control and trying to make the work go the way we want it to but being open to let the work dictate the story and form.

At a conference a woman said to Madeleine L’Engle about her Newberry winning A Wrinkle in Time. ‘I read A Wrinkle in Time when I was eight or nine. I didn’t understand I, but  knew what it was about’  Madeline L’Engle goes on to say, ’As long as we know what it’s about, then  can have the courage to go wherever  we are asked to go, even if we fear the road may take us through danger and pain.’  For some of us that may mean drawing on memories we would rather not dredge up or being ready to take a risk in our writing or trusting that the work knows what is needed better sometimes than our rational mind does.

‘The artist must be obedient to the body of the work, knowing that this involves long hours of research, of throwing out a month’s work, of going back to the beginning, or, sometimes scrapping the whole thing.’ Or how about this one a few sentences later, ‘when the words mean even more than the writer knew they meant, then the writer has been listening.’ How often have you had someone see something in your work that you were unaware of yourself? Or that you didn’t know you felt until or remembered or held that view until after the words were written down?

I don’t feel I can give an adequate review of this book. It’s one each of us needs to read for ourselves. And now I have it out from the bookcase, I think it’s time I re-read it as well. It might just clarify a few things I’ve been mulling over for a while.

One last quote to leave you with - ’When the work takes over, then the artist is enabled to get out of the way, not to interfere.
But before he can listen, paradoxically he must work. Getting out of the way and listening is not something that comes easily, either in art or in prayer.’ These words are worth thinking seriously about.

As in any Madeleine L’Engle book I find there are lines that will challenge thinking and maybe even some I will disagree with.  That doesn’t matter because at least it has challenged me and got me thinking about the question enough to formulate my own response.

First published in 1980, this book is still as relevant, insightful and encouraging or challenging, today as it was when I first read it. I hope I’ve convinced some of you who haven’t read it, to give it a go and I’d love to hear your responses to it.

Note: This is not the cover I have on my edition, but I couldn't get the other one to come up without being too blurry. And anyway this one is so pretty with its blue, I couldn't resist. Over the years Dale has written fiction, poetry, children’s fiction, bible studies and Sunday school lessons. More information about Dale can be found at www.daleharcombe.com or on her Write and Read with Dale blog http://www.livejournal.com/users/orangedale/

Email ThisBlogThis!Share to TwitterShare to FacebookShare to Pinterest
Labels: Book Review, faith and art, getting out of the way., listening to the work, Madeleine L'Engle, obedience, walking on water, writing