On Writing 10th Anniversary Edition: A Memoir of the Craft
by Stephen King (2010; first published 2000) 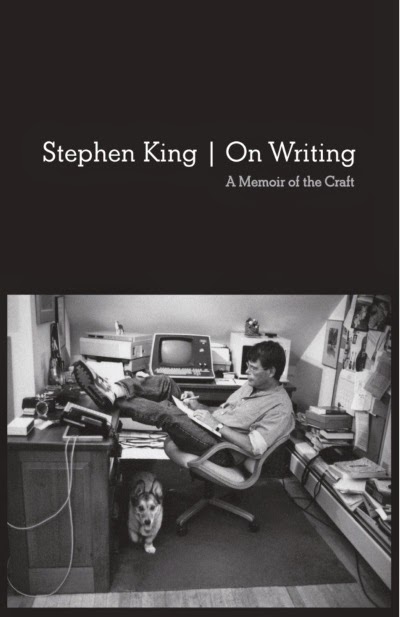 Stephen King is a veteran author who has wooed millions of avid fans with his own special brand of suspense, horror, faith and the battle between good and evil.  To date he has written 65 books and sold over 330 million copies.  To be honest, I’ve read only one of his novels – The Stand – and have watched the film adaptation of the emotional The Green Mile.

Whatever you may think about his preferred genre, his book on the writing craft On Writing is an influential classic often quoted and still relevant some 14 years after it was first published.

As indicated in the title On Writing is part memoir, part handbook. King writes with a lucid, entertaining and humerous style peppered with the occasional strong language. The first one third of the book recounts the difficulties of his early childhood, his adventures as an adolescent, his burgeoning interest and success in writing, his enduring romance with his wife Tabitha, and his winning struggle against drug and alcohol addiction as a successful writer. Interspersed within this colourful narrative, with its focus on the influences that propelled King into his writing career, are occasional gems of writing advice. The last quarter of the book details King’s near encounter with death after being struck by a van in 1999 while halfway through On Writing . I found his honest account of this struggle to return to writing particularly moving.

The middle of the book (over a third), gives King’s approach to writing – from the prime rule ‘write a lot and read a lot’, the basic tools in the writers toolbox – vocabulary, grammar, style, and voice. He speaks about the writing process, how to court the muse (work consistently and hard), right through to finding ideas, critique, editing, looking for agents and publishers.   He has a lot of good stuff to say about adverbs, dialogue, description, characterisation, back story, research and theme. He is wary of writing groups (but not against them) and is even more sceptical of plotting – being the archetypical panster. And in all this, for him the story is king.

As a writer, I found On Writing refreshing and encouraging.  Even the middle section takes a much broader approach than the strictly how-to tomes that tend to focus on the mechanics. King’s book doesn't neglect the mechanics but I think he also addresses the heart. I was fascinated by King’s own writing journey and how his background (from a poor single parent family with strong work ethic and Methodist ties) has impacted on him as a man and a writer. I was particularly inspired by his discussions about how these principles worked in creating his own fiction. He is definitely in the ‘tell it how you hear it’ side of language debate – and is not averse to being blunt. On the other hand, themes of God, faith and redemption often recur in his fiction and he notes that these themes are important to him personally (see here also).

I’m glad I took to the time to read Stephen King’s On Writing.

“The rest of it - and perhaps the best of it - is a permission slip: you can, you should, and if you're brave enough to start, you will.”

Stephen King, On Writing: A Memoir of the Craft

Jeanette has practiced medicine, studied communication, history and theology and has taught theology.  She is currently caring for her children, enjoying post-graduate studies in writing at Swinburne University and writing her Akrad's fantasy fiction series.  You can read some of her short fiction here. She is about to have a short story published as part of the Tied in Pink anthology next month (profits from the anthology go towards Breast Cancer research) .

She is actively involved in a caring Christian community.