Book Review ~ For Such A Time, Kate Breslin 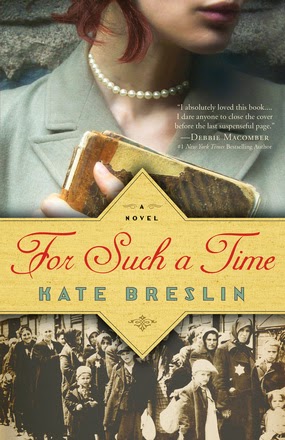 For Such A Time ~ In 1944, blonde and blue-eyed Jewess Hadassah Benjamin feels abandoned by God when she is saved from a firing squad only to be handed over to a new enemy. Pressed into service by SS-Kommandant Colonel Aric von Schmidt at the transit camp of Theresienstadt in Czechoslovakia, she is able to hide behind the false identity of Stella Muller. However, in order to survive and maintain her cover as Aric's secretary, she is forced to stand by as her own people are sent to Auschwitz.

Suspecting her employer is a man of hidden depths and sympathies, Stella cautiously appeals to him on behalf of those in the camp. Aric's compassion gives her hope, and she finds herself battling a growing attraction for this man she knows she should despise as an enemy.

Stella pours herself into her efforts to keep even some of the camp's prisoners safe, but she risks the revelation of her true identity with every attempt. When her bravery brings her to the point of the ultimate sacrifice, she has only her faith to lean upon. Perhaps God has placed her there for such a time as this, but how can she save her people when she is unable to save herself?

Reading a book inspired by a story I already know and love, (the biblical account of Esther) meant I had a fair idea how For Such A Time would unfold. But Kate Breslin’s debut novel kept me reading to the last chapter with more than a couple of unexpected twists and turns to render this a most unique re-telling of the well known Esther story.

Any story set in WWII concentration camps requires the reader to take on what we've come to expect from quality historical fiction ~ harrowing accounts of life in desperate times...and then some. Thankfully for my reading preferences, For Such A Time included a generous dose of romance with the right amount of heartbreaking suspense one would expect from a war-time drama.

I particularly enjoyed secondary characters Uncle Morty and young houseboy, Joseph, and predictably cheered when the bad guys were outsmarted by the good guys.

But what kept me reading was the relationship between our protagonists, Stella, and the man who saved her from the firing squad, Aric von Schmidt. Kate Breslin wrote Aric’s struggle between what he knew to be right and true, versus Nazi Party ideology extremely well and I enjoyed how she unpacked the internal conflict of this very German character.

I found some of the scenes at the end fast paced and close to unbelievable, but then the best war stories usually are tales of remarkable survival and incomprehensible bravery and sacrifice.

If you’re a fan of WWII settings, and/or stories based on Biblical events, you will enjoy For Such A Time. Each chapter begins with a scripture verse from the book of Esther which made the connection between Breslin’s fictional account and what we know from the Bible, easy to match.

I highly recommended For Such A Time by Kate Breslin.

Email ThisBlogThis!Share to TwitterShare to FacebookShare to Pinterest
Labels: Dorothy Adamek, For Such A Time, Historial Romance, Kate Breslin