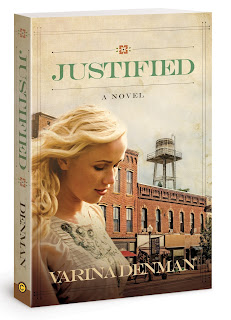 I’m the first to admit I’m a harsh critic. So if I tell you I’ve not only got Varina Denman’s two books on Kindle but I’ve also bought print copies you’ll know I think they’re really, really good!

Justified follows on from Varina’s 2013 ACFW Genesis Award winner, Jaded. (You can read my review here). Having said that, Justified is a stand-alone novel, and equally as good as Varina’s debut work.
Fawn Blaylock is unmarried, pregnant, guilty, and the subject of small town gossip. Luckily, she has the support of Ruthie, (the heroine from Jaded) despite the fact their families don’t speak.

Fawn isn’t on great terms with her parents, either. Not only is their love horribly conditional, especially on her father’s part (I wanted to sign him up for parenting classes!) but they think she should marry the father of her baby, Tyler Cruz, because he comes from a rich family like theirs. More importantly, because it would help get rid of the embarrassment of having an unwed mother for a daughter

Tyler thinks Fawn should marry him too. He doesn’t like the fact Fawn is showing an independent side, but Fawn wants to have as little to do with him as possible. She wants to show the world she can make it on her own, but how can she? She comes from a well-to-do family from which she is now cut off, and has no idea how to cope with being poor.

Help comes to Fawn in unexpected ways. She’s been given a house to live in rent free. It might be rundown and in need of repair, but why would anyone do that? And who is her benefactor?

Ruthie’s Aunt Velma and Uncle Ansel are a big help. Help also comes from their son, local high school teacher and football coach, JohnScott. Quite a lot of help. And Fawn isn’t quite sure how to take it any more than JohnScott knows why he’s giving it. After all, she used to be a student at the same school he taught at which makes them both feel a bit odd. Still, the more he looks after her, the more she accepts and the more their relationship grows.

I really liked Fawn. Her struggles are enormous but she’s determined to do the best for her unborn child. JohnScott is a great combination of tender and torn in his feelings toward Fawn and I warmed to him right from the start.

Again, like I did with Jaded, this Aussie/Kiwi girl loved reading about Texas. Varina writes so well, I had a movie going on in my head, featuring dialogue in a Texan twang and complete visuals of all the characters and their idiosyncrasies. I loved the way the small town gossip was portrayed, laughed out loud at many of the different sayings and colloquialisms, saw the perfectly described landscapes very clearly.

Justified is a fabulous contemporary Christian romance, full of realism in the spiritual journeys, a healthy dose of suspense, and loads of good old chemistry between the hero and heroine. I simply loved it.

Look out for the third book in the series, Jilted, coming soon. Also look out for my interview with Varina next Wednesday. She's a great gal! 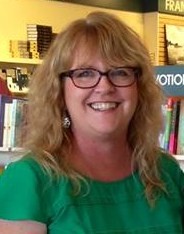 Andrea is an author and avid reader of contemporary romance. She has written two novels: A Simple Mistake and Too Pretty.