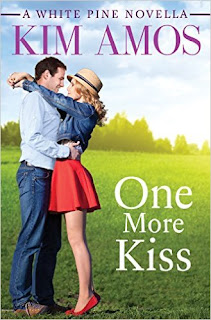 After reading, I still don’t know.

It didn’t start well: it started with a prologue in which the main character finds out she’s pregnant, and then skips back in time to before her marriage.

Yes, it’s a romance and we all know that means our hero and heroine have to ride off into the sunset together at the end of the story. But that’s the point: they get their happy ever after at the end, and we’re kept guessing will they/won’t they as we read, so we readers can pretend that it might not actually happen (knowing we’re lying to ourselves, but prepared to suspend that knowledge for the sake of enjoying the story’s tension).

Showing us the happy-ever-after before we even hit Chapter One spoils the anticipation, at least for me.

We then got into the guts of the story: small-town America just before Halloween, and Betty Lindholm has just found out the advertising banner she ordered has an embarrassing misprint: instead of advertising her new shipment of satin, it says ‘Satan is here’.

It’s a small town, and before long everyone is concerned for the state of her eternal soul (as well they should be. While she attends church—something I hadn’t expected from the blurb—her attendance comes across as cultural rather than spiritual).

Betty finds she’s losing business over the sign, even though it was only up a couple of hours, so she enlists the help of hunky Lutheran pastor Randall Sondheim. One thing leads to another and she ends up married to him. As we found out in the prologue, which makes would could have been a spoiler so much not a spoiler.

The novella is part of a series, and I thought the middle had too much focus on recurring characters from other books rather than the hero and heroine of this book. The end was also an anti-climax. It ended with an epilogue which carried directly on from the prologue, and was followed by a sample from the next book in the series. Overall, it left me feeling flat because I’d got less than I’d expected. This, combined with the average writing, would have left me ambivalent if I’d been a general market reader looking for a general market romance.

However, I’m a Christian reader and reviewer, and while I do read some general market romance, it usually leaves God completely out of the equation which means I can enjoy it (or not) based on the plot and characters without being disturbed by the faith elements.

And those faith elements are what disturb me about One More Kiss, and why I can’t recommend it.

The Dear Author review had warned me there were “sexytimes” and that it *definitely* wasn’t an inspirational despite being about a pastor. But I didn’t expect the sexytimes to be on Sunday afternoon, just after said pastor had delivered a rousing inspirational sermon.

I also didn’t expect to come away with the feeling that none of the characters—including the pastor—actually believed in God. I got the impression he’d become a pastor out of some misguided sense of needing to serve penance for his past sins, not because he had any call from God.

The members seemed more interested in proclaiming and maintaining their social status than any relationship with God. I know, I know, it wasn’t an inspirational … but the characters didn’t feel at all realistic, not based on any church I’ve ever been involved with, or the Christians I know.

And that’s what bothers me. Either the author hasn’t done her research and she’s completely misrepresented modern Christianity, or she has done her research … and the churches she visited are really like that.

Personally, I don’t know if this focus on the external, the social aspect of church, is typical of US churches, but I suspect not—at least based on the fictional churches I’ve “visited” through Christian romance novels. But I don’t think it’s normal for churches and their pulpits to be so utterly bereft of God.

General market readers are going to read One More Kiss, and believe it represents modern American Christianity—shallow and hypocritical. It’s going to make the people who most need God’s message that much less likely to pick up a book that might show them who God really is.

One More Kiss shows me there is a place for general market fiction written by Christians, where church—if it’s mentioned at all--is a place people who love God meet and seek to serve. Where Christians seek to follow Jesus Christ, not social status. Where God is the centre, not a minor player (if He features at all).

And that’s why I can’t recommend One More Kiss to anyone, Christian or non-Christian.