Crowdfunding for Publication - Part 4. After your campaign

In my last three posts, I've talked about different aspects of planning your crowdfunding your campaign. You can read these posts here, here and here.

By now, you have planned and executed your campaign, and it's now over. What do you do next? 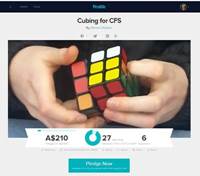 Successful Campaign
If you run a successful campaign, congratulations. It's time to celebrate, but remember, there is still work to be done.

The first thing to do is make sure you thank all your supporters. Send them a message through your crowdfunding platform, thank them on social media, and write a blog post thanking all your supporters. Try and do this as soon as possible after your campaign closes so everyone knows you were successful.

During the production of your book, update your supporters regularly so they can be kept up to date with the progress, and get excited about your book. The number of updates will depend on how close you are to publication.

For example, when I published Swallow Me, NOW!, we were designing the book when the crowdfunding campaign ended, so there weren't many updates other than an announcement that the book was at the printers and available as an ebook, and letting everyone know when I had received copies of the book. I also updated them on progress about sending out the rewards. Many of these happened after the book launch as I gave supporters the option to pick up their books at the launch.

When your book is ready, it's time to make sure everyone gets their rewards. One way is to do this is to download a spreadsheet of all your supporters and tick them off as you send copies of your book and any other rewards they are put in the mail. If you are personalising signed copies, you may want to contact your supporters to see who they would like their copy signed to.

When all the rewards have been sent. Celebrate your successful campaign once more.

Unsuccessful Campagin
If your campaign is unsuccessful, you can still celebrate. You have come a long way and you have some new supporters who you know will be interested in your book. Send a message to your supporters to thank them all for their support.

The next step is to come up with a Plan B to get your book published.

Are you able to publish the book without crowdfunding support? If not, are you able to tweak your campaign and relaunch it with a lower target amount?

Are you able to push back your launch date and put up a pre-order page on your website to get pre-orders between now and your publication date?

Is it time to do something completely different?

Once you've decided what to do next, let your supporters know. They may still want to pre-order a book through an alternative method, support a new crowdfunding campaign, or join your mailing list to keep up to date with what you are doing.

An unsuccessful campaign can be disappointing, but it's not the end of your journey.

I hope you've enjoyed this series of posts about crowdfunding your book. There are a few days left to support my campaign here. While you're there, you may want to look at other campaigns in the Writing category to see what other people are doing in their campaigns.

Follow her writing journey at www.melissawrites.com.au and www.melissagijsbers.com
Posted by Melissa Gijsbers at 05:00