Last November, as part of the National Novel Writing Month (NaNo), I wrote the first draft of the latest novel in my Regency-era ‘Legacy of Grace’ series. A few weeks ago I completed the edits on this story, which concerns a young artist from 1819, and the exhibition of a painting at the Royal Academy of Art at Somerset House in London.

Three days later I was celebrating Australia Day at nearby Berrima, a town considered by some to be Australia’s ‘Georgian’ town, due to the high numbers of remaining early colonial buildings. I was attending for a number of reasons, one of which involved taking my children to hear my mother play the pipe organ at Holy Trinity Anglican church, a beautiful Edmund Blackett designed church built in 1849, which is reputed to have stained glass windows dating from the 16th century. (Reputed, because it’s mentioned on a handout, but nobody present could confirm or deny. I’m happy to go with it.) After listening to Nanna play, we wandered down to the church hall, where the local residents group was holding a jumble sale (gotta love a ‘jumble’ sale – how Agatha Christie!). 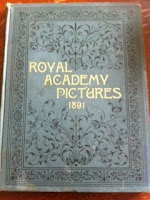 For me, any excuse to check out secondhand books is a good excuse, so I perused the tables of books whilst my family checked out the cakes and biscuits on sale. Imagine my astonishment when ‘jumbled’ among contemporary paperbacks and decade-old mags I discovered several fairly non-prepossessing old volumes – pictorial catalogues from London’s Royal Academy of Art from the late 1800s.

Coincidence? I think not.
Confirmation? Quite possibly.

I love how God, the “author and perfecter of our lives” is continually orchestrating moments so we can recognize just how all-powerful and omniscient He is. It may seem such a little thing, but seeing that book, filled with illustrations of paintings exhibited in 1891, really boosted my confidence in the things I’d previously researched and imagined. Because seriously, how many copies of such a book would exist in Australia, let alone be in a place where I (possibly the only person in Australia who might be interested!) could find it, let alone afford it. (Thank you to the very nice man who sold it to me for a LOT less than I expect it might sell on e-bay – don’t worry, I’m not selling!)

The cream atop this wonderful piece of metaphorical pie was another find perfect for research purposes: a pictorial guide to Newby Hall, a house in North Yorkshire with Robert Adams-designed rooms—just like I’d written about in my novel.
Coincidence? Confirmation?

Through this experience, God again showed how He can make the invisible visible, how He is always doing more behind the scenes than we ever give him credit for. One of my pastors once said: ‘God has a plan, He is is faithful, and we can trust Him.’ To these truths I like to add that God loves us, and He has a good plan, He is faithful, and we can trust Him.

I don’t always see it, but deep down I know He is orchestrating that which is invisible to one day perhaps be visible. That the story on my heart might be shared beyond my faithful beta-readers. That the frustrating, tangled relationship might be resolved. That the pain might have purpose.

The Author is doing way more than we realize – or give Him credit for - as a thousand times each day He proves His love, His good plans for his children, His faithfulness.

So I trust Him.

How about you? Do you have instances where God has worked a seeming ‘coincidence’ into confirmation? Did you notice God's at the time or was it something you realized later?

Carolyn Miller lives in the beautiful Southern Highlands of New South Wales, Australia, with her husband and four children. A longtime lover of romance, especially that of the Regency era, Carolyn holds a BA in English Literature, and loves drawing readers into fictional worlds that show the truth of God’s grace in our lives. Her novels have won or finaled in over a dozen contests, including the 2014 RWA ‘Touched by Love’ and 2014 ACFW Genesis contests. Carolyn is a member of American Christian Fiction Writers and My Book Therapy, and is represented by Tamela Hancock Murray of the Steve Laube Agency.