Book Review Heart of a Cowboy 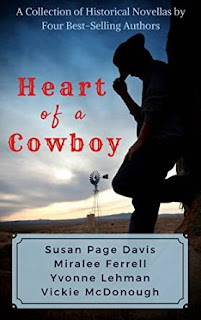 Hearts in Pursuit By Susan Page Davis Can Abby and Sam fight their way through the danger and violence and live long enough to find love? Texas, 1880. Abby and Sam pursue a band of raiders to rescue their younger siblings. Abby’s father is gravely injured, and she knows she can’t return home without her little sister. Sam’s father wants to thwart his powerful Mexican father-in-law and stop him from taking Pablo to live with him south of the border, but once he has Pablo back, will he continue the search for Abby’s sister? Abby and Sam feel it is up to them to keep the recovery mission on track. Though romance seems to have no place on the trail of danger and violence, can this journey draw them closer? Hearts Reunited By Miralee Ferrell Mercedes Taylor is determined to save her ranch after her father’s death, but she won’t let anyone help—especially not her old friend Jesse Townsend who deserted her so many years ago. The pain his family inflicted on hers goes too deep for her pride to forgive. After riding the trail for five years, Jesse Townsend returns to his family property to find the girl he’d once loved all grown up—and more prickly than he’s ever seen her. After his mare is seriously injured, he has no choice but to call on Mercedes—the local animal doctor—for help. Add the attractive banker’s daughter who Jesse seems smitten with, and trouble starts brewing. Can Mercedes and Jesse set aside the old family feud and find their way back to the love that had only started to blossom when Jesse left? Have Dress, Will Marry By Yvonne Lehman Julie Hayes must escape from Wildcat Mountain. Her mother died, leaving her with a step-father she doesn’t trust. James, who she thought would be her means of escape, is gone. Her only hope is to approach the cowboy, saddleback preacher Timothy Sullivan, when he makes his circuit into Wildcat Mountain. She asks, “Will you marry me?” He says, “Yes, of course,” expecting to perform a ceremony for her and James. Believing Julie is in danger, Timothy takes her to the Sullivan Ranch. Suspicions abound when she’s accused of stealing a horse and jewels. While Julie is trying to become the kind of woman a preacher would want to marry, Tim is trying to realize his ranching dreams, which don’t include being a circuit riding preacher. The Hand-Me-Down Husband By Vickie McDonough Ellen Stewart despises Lance Garrett. If not for him dashing into Isabelle’s life and stealing her heart and filling her head with his dreams, her little sister would still be alive and safe at home. When she receives Lance’s letter requesting help, Ellen rushes to Silver Springs, intent on taking charge of her young niece. A rugged ranch is no place for a motherless baby. But when she realizes the depth of Lance’s despair, she can’t leave him alone. Though everything within her wants to flee back to the big city, something makes her stay. Tessa needs her father, for one—and he needs her. Ellen knows what it’s like to lose all she’d dreamed of. When local church members make a stink about Ellen living at Lance’s ranch, they are forced to marry. Ellen didn’t want a hand-me-down husband, but could their marriage be God’s will for them both?

My Review:
I was given this book free for an honest review.

This book contains 4 novella's each featuring cowboys.
The first had me from the very beginning. In fact I could see it as a movie, a true western. Abby's younger sister Ellen and Sam's younger brother Pablo are taken by Mexican Raiders planning to take them to Mexico. I could see the story playing out as a movie and loved Abby's strength and courage. This story was a great start to the novella.

The second book features Mercedes and Jesse childhood friends who due to an incident led to the families becoming estranged. We see Jesse return to his ranch needing Mercedes help. We then see the struggle of being former friends with still having feelings for each other and how they deal with it.

Book Three features Julie and Timothy. Julie is stuck on living on a mountain with her step father and asks Brother Timothy to help her in an unconventional way. Timothy is the circuit pastor who wants to be a rancher. Julie learns what a real family is like when she meets Timothy's family but there are issues with trust and accusations by her step father.

Book four features Ellen and Lance. Ellen has gone to help Lance look after her niece after the death of her sister. She goes to help wanting to take her niece back to St. Louis with her but see the love Lance has for Tessa. I love how Ellen and her sister were so different and how she is able to help Lance and in turn learn more about herself and that she does have a purpose.

All in all this is a good collection of novellas which I would highly recommend.
Posted by Ausjenny at 05:00