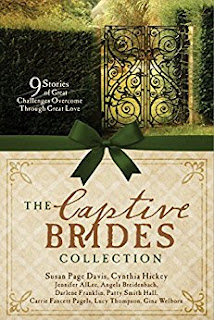 Love Brings Freedom in 9 Historical RomancesJourney along as nine historical women are about to make their escape from some of life’s greatest challenges. Can their captive hearts be freed to dream, to dare, to love?Love’s Labour’s Found by Jennifer AlLee - Montserrat, West Indies, 1655Temperance Simms only wanted a better life. Instead, she finds herself labeled a criminal and sold as an indentured servant. After a kind man saves her life, can Temperance trust that God will turn her sorrow into something beautiful?His Indentured Bride by Angela Breidenbach - Pennsylvania, 1770-1775 Leaving Scotland for a short indenture with her betrothed, Maire Gree’s contract is sold when disaster strikes her kindly owner, and then extended through cruel circumstances. Can Kirk Lachlan’s service in the American Revolution save her or will she lose love and freedom forever?The Suspect Bride by Susan Page Davis - Oregon, 1890sVerity Ames cooks at the restaurant where shy lawyer Jack Whitwell eats lunch daily. As Jack works up courage to ask her for a date, the sheriff walks into the restaurant and arrests her for murder.His Golden Treasure by Darlene Franklin - Barbary Coast, San Francisco, CA, 1873Goldie Hatfield grows up on in the Barbary Coast until her guardian demands she pay the cost of her upbringing—or work at her brothel. How far will Pastor Joshua Kerr go to set Goldie free?Through Stormy Waters by Patty Smith Hall - Atlantic Ocean, 1755Deported to the British colonies for her father’s crimes, Charlotte Singleton helps Captain Andrew Randell when an epidemic breaks out on the ship. Can two battered hearts find love in the midst of a storm?Moira’s Quest by Cynthia Hickey - New York, 1869A quest for revenge ends in a marriage of convenience and a feisty Irish lass discovers that not everything is as it seems as family secrets are revealed. An Irish cop, bent on saving the fallen women of Five Points, New York, finds himself thrust into the role of husband with a woman determined to break down a notorious crime boss. Can these two pull together and find a love bigger than they are?Love’s Escape by Carrie Fancett Pagels - Virginia, 1850With her life in peril, Lettie seeks escape from slavery. When Nathan offers to “conduct” her North via an unusual segment on the Underground Railroad, will his efforts help or do them both harm?Waltzing Matilda by Lucy Thompson - Sydney, Australia, 1821Henry didn’t plan on a runaway convict masquerading as a shepherd. Or on the woman’s baby. Keeping them safe will cost him his freedom—or will it?A Score to Settle by Gina Welborn - On the Missouri River, 1870For JoJo the kiss was a means to an end—she wanted his wallet. For Cyrus her kiss changed everything. He vows to help her escape the snake oil salesman she works for, but exposing the man’s lies may mean settling a score at a cost neither JoJo nor Cyrus can pay.

Firstly thanks to Netgalley for my review copy.

This book has 9 novellas in it. Each story has a heroine who is a captive in some way. From indentured servant, convict, slave, wrongly convicted, plus a few other scenarios. We also have different locations from the West Indies, Australia to America. Each story is different and most have some danger and tension in the stories.

While I am not going to review all the stories cos it would make the review to long I will feature a couple.

Waltzing Matilda by Lucy Thompson - Sydney, Australia, 1821
This story we see Matilda running away with her baby Charlotte from the Paramatta factory and runs into Henry who is a free man now. Henry is on his way back to his farm with sheep when he encounters Matilda. Matilda is trying to hide out as if she's caught she will be sent back and will probably loss her daughter. I liked reading a story set in Australia and am glad others will also get to read a story about my country.

Love’s Escape by Carrie Fancett Pagels - Virginia, 1850
Now this is a story that I love because you don't read as many books involving slaves escaping through the underground railway. Lettie really wants to get away as things have suddenly changed and she is in even more danger. Although if Lettie runs away and is caught she could be in even more danger. Nathan is part of the underground railway and has a plan to get her to safety. I loved how this was planned and how it all worked out.

The Suspect Bride by Susan Page Davis - Oregon, 1890s
This story was one of my favourites. I was actually in hospital and every time the nurse came to do my ops I was saying I just want this story finished because I want to know what happens. We see Verity arrested for murder and Jack is a lawyer who will represent her. The story takes us through the arrest and why her. I love how Susan keeps the suspense of what will happen next.

This whole book is a really good read and I would highly recommend it.
Posted by Ausjenny at 05:00