Being Jazmine is the third in Cecily’s series about Jazmine Crawford. Cecily writes fiction for ‘brave-hearted girls’. Her books are about young teenagers dealing with every day issues like moving to new schools, death and bullying.

Jazmine has two other, less common, challenges, her father has died and she is ‘hard of hearing’ and needs to wear hearing aids.

In the first of the trilogy, Invisible, Jazmine tries to keep out of trouble by seeking to be as invisible as possible. She learns to tackle some of her challenges with the help of her grandmother, a teacher, and a friend.

Initially, Cecily only intended to write two books in the series, Invisible and Invincible but an English professor from the US who works with the deaf contacted her and begged her to write another book about Jazmine mixing with at least one other deaf character. In Being Jazmine, Cecily takes us on a new journey with Jazmine.

Jazmine has conquered many challenges but she is tired, exhausted really. She slowly works out that what she’s feeling isn’t normal. Her need for sleep is because in every class and every conversation she is struggling to lip read and hear everything. But she’s not hearing everything, she’s missing a lot.

One day she sees some deaf people signing together and she is given the chance to make friends with people who talk in Auslan (Australian sign language) rather than lip reading.

But even this new group of friends have their cliques and own culture. Besides which, Jazmine isn’t fluent in sign language, she’s never had to be. The book shows you her struggles in both worlds.

Cecily is a master at immersing you in the world of young teenage angst. Each book keeps you in that world to the end. I particularly appreciated learning about the challenges of being deaf or hard of hearing. Cecily is not a member of that group but she grew up in a completely different culture herself and so understands and is able to show someone who is between worlds, never quite fitting in either.

These books are written for the general market. They would make excellent texts for year 7-8 English as they raise many common issues and have plenty of potential discussion issues. They would also be good books for mothers and daughters to read and discuss. Issues of friendship and rejection, grief, struggle, parent/child conflict, victory and success. Clean reads with an occasional tiny mention of things like prayer.

Cecily has also written two books in another series Love and Muddy Puddles, and Charlie Franks is A-OK. This series is more light-hearted and the second book has just won the Caleb award for published fiction and overall Caleb award for best book 2017.

Cecily has also written non-fiction and is an editor. She has recently produced a video course on writing your memoir. Her website is http://www.cecilypaterson.com/ 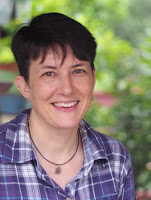 Christine Dillon was born in Australia but grew up in Asia. She now works in Taiwan as a Bible storyteller. Her book 'Telling the Gospel Through Story' was voted 2013 Outreach Magazine's Resource of the Year in Evangelism and continues to inspire innovative and engaging Bible storytelling. Believing in the beauty and power of story prompted her jump into fiction. Grace in Strange Disguise was runner-up in the Athanatos Christian Writing Contest. Christine loves reading and keeps sane by cycling, swimming and hiking.