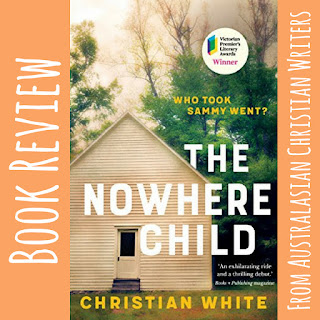 Kimberley Leamy is an Australian photography teacher whose everyday life is interrupted when a random stranger—an American—introduces himself and tells her he believes she is actually someone else.

He believes Kim is actually Sammy Went, who was abducted from Manson, Kentucky, twenty-eight years earlier.

It's a great opening scene.


The story then flips back to Manson, Kentucky, in 1990, to days before two-year-old Sammy Went was kidnapped. We meet her family—her fundamentalist Christian mother, her unbelieving father, her rebellious older sister, her inquisitive older brother. It's a world where "fundamentalist" is a dirty word, because they're the extreme kind of Christian, snake handling and all.

(No, The Nowhere Child isn't Christian fiction, despite having a church setting.)


We find out pretty early on that Kimberley is Sammy Went, but that is only the beginning of the mystery. How did a two-year-old American girl end up in Melbourne, Australia, with no memories of her earlier life? Who kidnapped her? Why? How?

The story alternates between Kimberley's present journey to find her past, and the past story. It's strong suspense, where nothing is as it seems. The characters unfold scene by scene,

The writing is generally strong (some of the dialogue tags annoyed me, but that's my only significant complaint). Kimberley's story is told in first person, while the past story is told in third person from the viewpoints of various different characters. It's an interesting technique, but one which works well in the split timeline structure.

The Nowhere Child is a great example of a split timeline story.


The two stories are closely intertwinned and the past story influences and impacts on the present until we reach a climax where all the questions are answered. The ending was unpredictable, but it fit.

Thanks to Affirm Press and NetGalley for providing a free ebook for review.