Book Review: No Time To Say Goodbye by Paul Arnott 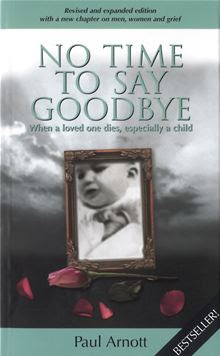 No Time To Say Goodbye by Australian author Paul Arnott should be on everyone’s bookshelf. Written for those who’ve suddenly lost a loved one, in particular parents whose children have died unexpectedly, it touches every heart with the raw journey of Paul and Roseanne Arnott’s journey in the months and years after their son James died of SIDS at nine weeks.

Paul takes the reader through the grieving process. Beginning with the numbness death brought to his young family, he chronicles the guilt, the tiredness, the anger, resentment and pain often present in the varying expressions of early grief, and unpacks the uniqueness of these first reactions experienced by him and his wife, and their young daughter, Alice. He also draws on examples of other families who’ve faced the unexpected death of a loved one.

This book is painful to read. But the insight is vital for anyone who cares to understand the particular needs of those experiencing a sudden death. Unlike the steps taken by the families of the chronically ill, No Time To Say Goodbye tackles issues such as slowing down between the time of death and the funeral. The importance of being allowed to navigate those days at one’s own pace, instead of being rushed by unknown protocols and the expectations of those who come alongside.

Paul asks the difficult questions many parents wrestle with when they lose a child. Questions many of us would like to ask God. He also shares the different ways some have found answers. He explores the ways men and women cope with grief and loss, and debunks some of the stereotypical myths of gender specific grief.

No Time To Say Goodbye is a quick read. But it commands respectful lingering. It’s the honest pulling aside of one family’s privacy. The sharing of what they’ve learned in a season they never imagined when they brought their little boy home from the hospital.

I read the revised and updated edition, with an added appendix on SIDS. I’d read books on loss and grief before, when I lost a baby to miscarriage. I wish I’d had this book then. And while the main focus is on helping parents whose children have died, it will touch anyone who’s experienced loss in our ever-changing world.

Review by Dorothy Adamek – Dorothy lives in Melbourne with her Beloved and their three children. Enamoured by all things 19th century, she writes The Heartbeat of Yesteryear, Historical Romance – Aussie style.