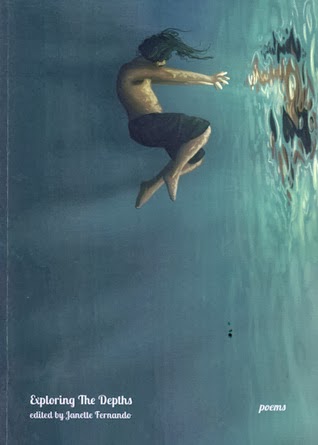 
This is the third poetry book I have read this year and I found more poems that appealed to m in this collection than in either of the other two. This is interesting, when you consider that the other two were The Best Australian Poems 2013 and The Best Australian Poems 2012. Twenty five poems in this anthology were either winning poems from the competition run in 2013 with the theme Exploring the Depths or extra poems chosen by the independent judge. The remainder of the poems which bring the total number to around eighty were chosen by a committee of poets.


Although the initial starting point for each poem was the same, the topics and issues covered are as varied as the poets themselves.  There were so many poems I enjoyed in this collection by a number of poets. Interestingly in this collection there were many more poems written by women than by men.


This is a collection to savour slowly. Some of my favourites were: Oh Hold Me, 1933, Leaving Warrnambool, After the Rain, Of a Photograph, Snow Gum, Immobile, Release, The Dawning, Enduring Love, Guildford Plateau Poplars, La Nuit Blanche, Death of Cold, Winter Solstice, Anon, A Life, Black Dog, (the Winning poem) Nothing but Time, Underwater (winner of the Francis Webb Award,) Until Death, Slow Dancing, Ascending into the Depths, and Jacob and Esau. On another read through I could probably go back and pick out just as many more other poems that pleased me with their imagery, expanded my thinking or in some way touched a chord in me.


This collection explores the depths of many and varied life experiences. You'll find such topics as depression, loss, nature, retellings of biblical stories, everyday life, football, doubt and knowing God. Despite some sad topics this collection is anything but depressing. Rather it is uplifting showing the hope that can uphold a person even in dark times.
A smattering of black and white photographs adds to the attractive presentation of this collection. I am thrilled with the beautiful photo of a jetty over the water and the rising sun that illustrates my own poem Grief.
Posted by Dale at 00:00