Set on proving to everyone that she’s no longer a party girl, Cassie is focused on her career as an event planner. But her dad’s top executive, Ryan Mitchell, proves to be a handsome distraction. Especially when someone from Cassie’s wild past tries to get her tangled in the life she’s worked hard to escape.

Ryan is taken with his boss’s beautiful daughter. But having been fooled by a brother who ran in her same circles, he is slow to trust. When Cassie’s newfound faith works its way into his heart, Ryan soon finds he wants to claim both her faith and Cassie as his own. 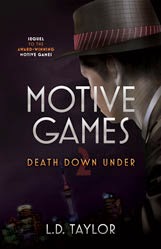 In Canada, Phil Roland is a hero. He’s saved his dad’s company, Motive Games; solved his dad’s murder; and exposed a mafia ring. But by his second day in Auckland, Phil’s life is out of control. The E3 East gaming show was supposed to be Motive’s big chance to get published. Instead, people are blaming Phil for a controversial FPS; someone’s hacked Motive’s game; and Australian mega- distributer, PFG, is threatening to ruin the company. The guy whose name keeps popping up? PFG president, Bailey Kant. Thanks to Kant, Phil is dodging the press and protestors and being trailed by the mysterious girl in green.

http://rhizapress.com.au/motive-games-ddu
Posted by Narelle at 05:00