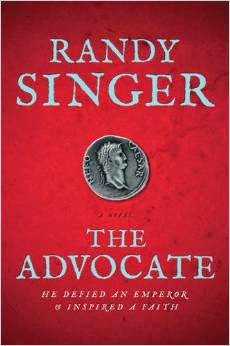 At the trial of Christ, Theophilus, brilliant young assessore raised in the Roman aristocracy, stands behind Pontius Pilate and whispers, “Offer to release Barabbas.” The strategy backfires, and Theophilus never forgets the sight of an innocent man unjustly suffering the worst of all possible deaths—Roman crucifixion.

Three decades later, Theophilus has proven himself in the legal ranks of the Roman Empire. He has survived the insane rule of Caligula and has weathered the cruel tyrant’s quest to control the woman he loves. He has endured the mindless violence of the gladiator games and the backstabbing intrigue of the treason trials.

Now he must face another evil Caesar, defending the man Paul in Nero’s deranged court. Can Theophilus mount a defence that will keep another innocent man from execution?

The advocate’s first trial altered the course of history. His last will change the fate of an empire.

I am this reader and Randy Singer is the author.

Randy’s written over 15 legal thrillers drawing on his knowledge and experience as a lawyer. The Advocate is his first historical novel and it’s worth however long his loyal fans have waited for it. I was lucky enough to read The Advocate as one of the 2014 stellar selections of Rel Mollet's book club.

Using the idea that the Bible books of Luke and Acts were written as legal briefs to defend the Apostle Paul against Nero, Singer takes the reader to the first century AD and the emergent Christian church.

By way of warning, this novel is full of extreme violence. Some scenes were hard to read and I’m glad I wasn’t watching them on a big screen. If so, it would have come with an R rating. The Advocate isn't for the squeamish.

But it is very much for the history lover. Roman daily life, self absorbed emperors, ancient architecture and Greek philosophy are very well researched and anchored my immediate engagement as reader. I was impressed with the imaginary yet completely plausible way the author wrote Theophilus' witness of Jesus' crucifixion.

For a man only mentioned a couple of times in the Bible, Randy Singer draws Theophilus into a pivotal and game changing player three decades later, in the life of Paul.

This book is for the reader who is looking for a fabulous ancient courtroom drama, with enough romance and plenty of gore to fulfill the accurate portrayal of life during the reign of some of history’s vilest emperors, and some of history’s most devoted followers of Jesus.

She's the winner of the 2013 FHL ~ Touched By Love Competition. Enamoured by all things 19th century, she writes The Heartbeat of Yesteryear, Historical Romance - Aussie style. Come say G'day at her blog, Ink Dots.