Confessions of a Writing Contest Junkie

Hi. My name is Carolyn, and I’ve been a writing contest junkie.

Since a random sighting at the closing ceremony of the Vancouver Winter Olympics first grabbed my attention and refused to let go (why was the Australian girl holding hands with an American? What was their story?), I’ve been addicted to writing ‘what ifs’. Pretty soon I started wondering if my stories had enough merit to be valued by people other than me (and my kind, so very kind, family and friends…)
So started my contest journey.

My very first contest was an Australian one (which shall not be named, on the grounds I may incriminate myself) where, shiny-eyed with hubris, I submitted a printed (!) copy of my masterpiece (yes, the postage costs were impressive) then awaited, with hope-filled trepidation for the rapturous response.
Surprise, surprise, it didn’t happen, instead proving so far less than rapturous that tears may have been involved...

(Note to self - and others: when judging a contest, find at least one thing to be positive about!)

Convinced the Australian market was not for me, I searched online and found a treasure trove of online writing contests, courtesy of the ever-updated Stephie Smith's Contest Chart. Most of these were American, but I figured that wasn’t especially detrimental— Americans love Aussies, surely they'd love my stories!

Some did. And some didn't.

Feedback ranged from 'love the setting!' to less positive comments about spelling, character motivations, even the page format (US letter preferred, not A4). Who knew? Certainly I didn't, but as I entered more contests, from the American Christian Fiction Writers to various Romance Writers of America chapters, I learned a great deal.

* Like the fact that some Americans cannot appreciate the English language unless in American form. (Ironic? I now use US spelling in my settings)
* That while many Americans might say they like Australians, really they prefer American characters in somewhat familiar settings. So my rendering of an Australian and Canadian at an Olympics might be a great read, but still proved a little too foreign for some.
* That to avoid being marked down by some (ACFW) readers, all references to dancing, drinking and swearing had to be eliminated in the first fifteen pages (a standard contest entry length).

Some comments were filled with such faint praise my writing was almost damned to extinction. Other people were extremely gracious, taking a great deal of time to show me where I could improve. And over time, my writing did improve.

The first contest where I placed was in 2012, where I came 2nd – second! - in a Romance Writers of America Texas contest. Thanks, God! (And Texas) Validation at last! This was followed by another writing contest placing, in a different RWA chapter. (Gotta love those Texans!)

I learned to treasure some comments (“I LOVE your hero!!!”) whilst sifting out the not-so-positive (“I didn’t like your hero at all!”) and ignoring those which made me wonder just what they’d been reading. (Hello? Of course the hero wasn’t trying to run down the heroine in his boat!)

After applying feedback advice and becoming more strategic in which contests I entered (must have an ‘inspirational’ category), I soon found myself placing more often than not, with the occasional bonus of prize money, and better yet, editor and agent requests. But while it was wonderful to know my writing was good enough to reach such a stage, the “Thanks, but no thanks” emails still had enough sting to dishearten, especially after spending weeks editing to suit their publishing house needs.

Late in 2013, after months of finaling yet never winning, I made the decision that if nothing happened with this one last contest (ACFW ‘First Impressions’) I’d give up writing and return to teaching high school full time. So I paid my entry fee, prayed yet again, and hit send. 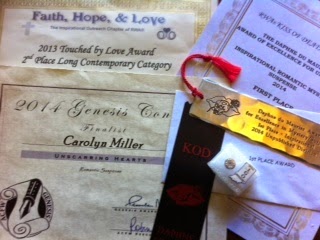 About a month later I learned I’d finalled in my category. Yay.

Thanks, God, but please…?
Christmas came, went…
Just before New Years, I got another email.
To say I’d won. My very first 1st!
Thanks, God! Happy tears ensued (and gushing thank you emails to the judges).

Encouraged again, I entered more contests--and won! (Thanks, God!) Several months later, I was a semi-finalist in ACFW’s Genesis contest, then a finalist, where once again, agents and editors were judges. A couple of months ago, I received a much anticipated phone call from American agent Tamela Hancock Murray, asking to represent me. Yay! Thank you, God!

Sure, entering so many contests has cost a bit (especially with the varying state of the Aussie dollar!), and receiving so many knockbacks and less-than-flattering comments has cost my ego and thickened my skin, but I’ve learned so much, about sharp writing, POV, the importance of sympathetic characters, and starting centred in action, all of which has helped give insight as to what readers (and editors) appreciate.

Contest writing might not be for everyone, but I’ve found this an invaluable way to develop my writing, whilst learning to understand the market, and best of all, have an agent find me – thank you God!