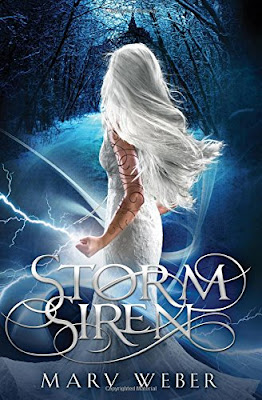 In a world at war, a slave girl’s lethal curse could become one kingdom’s weapon of salvation. If the curse—and the girl—can be controlled.
As a slave in the war-weary kingdom of Faelen, seventeen-year-old Nym isn’t merely devoid of rights, her Elemental kind are only born male and always killed at birth—meaning, she shouldn’t even exist.
Standing on the auction block beneath smoke-drenched mountains, Nym faces her fifteenth sell. But when her hood is removed and her storm-summoning killing curse revealed, Nym is snatched up by a court advisor and given a choice: be trained as the weapon Faelen needs to win the war, or be killed.
Choosing the former, Nym is unleashed into a world of politics, bizarre parties, and rumors of an evil more sinister than she’s being prepared to fight . . . not to mention the handsome trainer whose dark secrets lie behind a mysterious ability to calm every lightning strike she summons.
But what if she doesn’t want to be the weapon they’ve all been waiting for?
Set in a beautifully eclectic world of suspicion, super abilities, and monsters, Storm Siren is a story of power. And whoever controls that power will win.
*****
It’s been a long time since I read a story from the young adult section of the bookshelf. Even longer since I picked up a fantasy. But I’m in Rel Mollet’s book club now, and I get to sample the wide range of literature she selects for us.

I remember from my high school teaching days that books written for teens can be an exquisite read, no matter the age of the reader.

Mary Weber’s fantasy debut, Storm Siren, sits in the exquisite pile. The first of The Storm Siren Trilogy, it’s a vivid tale of ‘storm controlling’ by our heroine, Nym, and the curse brought upon her by her own powers. It’s a story of turning your curse into a gift and the price one must pay for redemption.

Sold and resold as a slave, Nym is a contradiction of fragility and grit. So damaged by the legacy of her powers, it’s no surprise she retreats to self-harming behaviours to cope with what she’s seen. And done. She has no safe place in a world tottering on the edge of destruction.

This is a coming-of-age story of a girl who’s an anomaly, even in the shapeshifting world of The Five Kingdoms. She’s a slave with the potential to win wars. She’s a broken character in the hands of those who can either destroy her, or help her discover her own self worth. And she’s crippled by the well-known struggles of self-loathing and purpose.

It's a story pulled together with beautiful wordsmithing. I loved Mary Weber’s imagery, romantic story thread, and for someone who hasn’t read fantasy in years, I fell into the created world without too much trouble.

A fast paced read which leaves the reader breathless right up to the final cliff-ending chapter.

Highly recommended for the fantasy reader who doesn’t mind the hair-raising last page questions, written so you just have to read book 2 for answers.

She's the winner of the 2013 FHL ~ Touched By Love Competition,
and the 2104 Inspirational Category Winner of the TARA Writing Contest.