Four Book Recommendations: Ehvah After, The Tie That Binds, Next of Kin, and The Trespasser

I'm doing something a little different this week. As some of you know, I'm a freelance fiction editor. Over the last couple of months, four of my talented clients have self-published novels, and today I'd like to introduce them to you.

Yes, these are my clients, so yes, these reviews are more recommendations and come with a heavy dose of bias. Having said that, I genuinely enjoyed each of these four novels: one contemporary romantic suspense, two historical fiction, and one middle-grade adventure. Something for everyone!

Ehvah After by Rose Dee

Ehvah Rowe’s life is in freefall. Her teen queen status is long forgotten, and with a childhood of tragic loss, no family save a diabolical aunt, and no career prospects, her L.A. celebrity world holds no future. It will take a murder, an escape to the Australian tropics, and the friendship of an Aussie bodyguard, for her to discover healing, faith, and a way forward.

David Blake knows how to be a soldier. His army training equipped him to fight and protect. But when it comes to helping a fear-filled celebrity navigate the same post-traumatic stress symptoms he has suffered, David discovers the challenge in forsaking his own strength for God’s plan.

There’s plenty of mystery and suspense along with some romance and all set against the beautiful backdrop of Queensland and more than a dash of humour from the locals (human and non-human. If there's one thing I'd change about Rose's writing, I'd take out her creepy-crawlies. I'm not from Queensland. I don't like snakes.). Snakes aside, Ehvah After is an excellent read for those looking for romantic suspense in familiar location.

Ehvah After is available on Kindle from Amazon. A paper edition will be published soon.


The Tie That Binds by Rita Stella Galieh 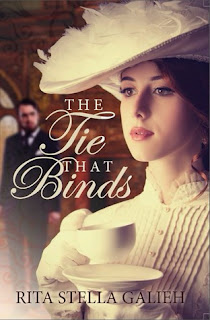 Everything can change in a heartbeat ...

All is well in the well-to-do Cantrell household until its scheming mistress begins to act on her self-serving plans.

Forced into the security of an arranged marriage and an uncertain future of eloping with her heart's desire, Charlotte Cantrell's faith and integrity are tested to the limit. Either choice threatens dire consequences to everyone she holds dear, and even as she hovers over her decision, she knows that once made it will affect the entire course of her life.

Only an unforeseen event can rescue Charlotte from personal tragedy and forsaken dreams.

It is Park Lane, London in 1859, and nineteen-year-old Charlotte Cantrell overhears her mother reminding her father that she is not their child. They also seem to be discussing her marriage, despite the fact that she has no desire to marry—unless they are suggesting Marcus, her brother’s handsome tutor.

Cornelia, her manipulative mother, has her own plans, and they do not include Charlotte wasting herself on a mere tutor. She has her eye on the twice-widowed Sir Humphrey, who is still in need of a male heir. Cornelia is fully aware that Charlotte has a weak spot—her love for her disabled brother—and Cornelia aims to utilise that weak spot to get her own way, and to alienate Charlotte from Charles, her beloved uncle.

The Tie That Binds is a well-written and well-researched Christian novel with a cast of fascinating characters that readers will both love and loathe. It is the second book in the Watermark Women trilogy, following Signed Sealed Delivered. Although the two stories have some characters in common, The Tie That Binds can easily be read and enjoyed as a stand-alone novel.

The Tie That Binds is available in paperback via Rita's website, www.ritastellapress.com

Next of Kin by Carol Preston

Fanny Franks was raised to believe in honesty, equality and acceptance, regardless of background or circumstances. When she meets brothers Jack and Jim, she is drawn to them by the alienation and injustice which seems to pervade their lives.

She is determined to intervene and help them find happiness, until trauma in her own life brings discrimination and shame for which she is ill prepared. In dealing with her own struggle she comes to understand what Jack and Jim are going through, and they find where they truly belong.

Next of Kin is another of Carol Preston’s historical novels set in the early days of Australia. She covered the convicts in her first books, then moved onto the early free settlers and their relationships with the freed convicts. With Next of Kin, she moves further forward again, to an Australia that is attracting more and more immigration … not all of it desirable.

Her storytelling and writing continue to improve, and while I’d like to say this is her best yet, I’ve already read the sequel and it was even better. So I’ll settle for saying Next of Kin is Carol’s best work to date. There is plenty of issues and conflict, and excellent characters. Well done.

The Trespasser by Karen Cossey

Caught trespassing at at an exclusive hideaway lodge, Logan Seagate is invited into the lives of the visitors there. But who are they really? Why are they so secretive about their real names? And what crime is going on at the lodge?

Logan's foster brothers and sister are also invited to the Hideaway Lodge and make friends with the family there too. But the fun doesn't last and soon they are captured, threatened with murder and trapped in a raging fire. Even their ninja-like Taekwondo skills can't save them. Will they all die?

The Trespasser is a modern day action adventure crime story with a heart. Follow Logan as he figures out who the criminals really are, and discovers some truths about himself and his foster family too.

The Trespasser is like an up-to-date, modern Famous Five or Nancy Drew. A great fun read, full of twists, surprises and laugh-out-loud moments. Enjoy it today!

The Trespasser is set in England, near Plymouth, where Logan trespasses on an exclusive country retreat to climb a cliff … and is caught by the imaginative Meeka, who is escaping from the Mines of Certain Doom and Death, and her father, Captain Blackbeard. Logan is pleased to make a new friend, especially one as interesting and adventurous as Meeka, but they soon find themselves getting a little more adventure than they had bargained for. Well, the West Country has long been known as pirate country. There are secrets hidden in those caves …

The Trespassers is a fast-paced adventure story with a healthy dose of comedy (illustrated by Meeka’s extensive vocabulary and penchant for made-up words). There is plenty of conflict, with a good balance between the external adventure conflict and Logan’s internal journey, and an underlying theme of family belonging. It’s not specifically Christian fiction, but it’s definitely written from a Christian world view and would make a great read-aloud story for school-aged children, or a read-alone story for middle grade readers.

The Trespasser is available from Amazon as a Kindle book.
Posted by Iola at 08:00