When Your Manuscript Just Really Isn't That Good

At the end of October I turned in my second book. This book was a tough write, for many reasons, and even as I hit send I knew that it still needed work. Fortunately (for me, maybe not so much for them) I have the world's most amazing publishing team on my side.

So while they got the fun job of reading my 100,000 not-quite-there-yet words, I had a fabulous time reacquainting myself with my husband and children, friends, overloaded to-be-read shelves and catching up TV programmes. Then came the developmental edits. These are basically where your editor tells you everything that is wrong/weak with your story and you get to work out how to fix it.

No matter which way I looked at it these were  BIG edits. Some of which were self-inflicted because of a brain that doesn't seem to like plotting which means I am generally working out my story as I'm writing it (I do not recommend this as a stress free writing strategy if you're on a deadline), some were because with ten months to go from nothing to completed manuscript I hadn't had the luxury of my usual two months pre-think time where I just mull things before I start writing, some were because I'd flat out underestimated the time required to research some of the aspects that I knew nothing about and others because of changes beyond me (like it's release date changing that means we're doing some rewrites to better fit with the season it's being released into).

Here's the honest truth. I love these characters but I have lived with them for the last ten months. Large scale developmental edits are kind of like having house guests stay for a loooong time, finally move out, then return with some friends.

As I mulled my editor's notes I was struck by two clear choices. I could stick to my guns, keep what was pretty much there in terms of plot and characters, but fix it up, strengthen the obviously weak parts, and it would be a perfectly okay book. It would take a lot of work, but it would be doable.

But the truth was that if what I wanted was for this to be a great book then tinkering around the edges, making some small and medium sized changes, wasn't going to cut it. A great book was going to require pulling the whole thing apart and rebuilding it from the ground up. In six weeks. Over my family's Christmas holidays.

Sometimes the dream is amazing. It's getting giddy over endorsements from your favourite authors, the first glimpse of your name on a book cover, and seeing first reviews come in. And sometimes it's knowing that it's time to put on your big girl pants, take all the photos down off your dining room wall, and (with the help of the world's cutest assistant) replotting your entire book using post-its :) 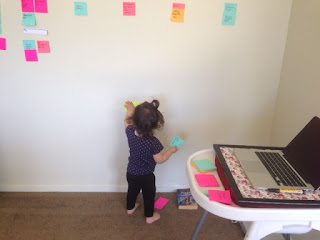 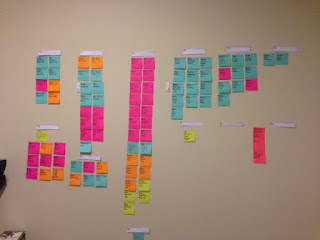 Kara Isaac lives in Wellington, New Zealand. Her debut romantic comedy, Close To You, is about a disillusioned academic-turned-tour-guide and an entrepreneur who knows nothing about Tolkien who fall in love on a Tolkien themed tour of New Zealand. It will be an April 2016 release from Howard Books. When she's not working her day job as a public servant, chasing around a ninja preschooler and his feisty toddler sister, she spends her time writing horribly bad first drafts and wishing you could get Double Stuf Oreos in New Zealand. She loves to connnect on Facebook at Kara Isaac - Writer and Twitter @KaraIsaac
Posted by Kara Isaac at 06:00