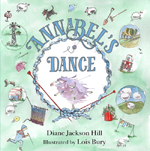 Hazy mazy oops a daisy, wriggle your ears but don’t go crazy!
Annabel is no ordinary sheep. She is wiggly and jiggly. Loud noises hurt her ears and no matter how hard she tries, she just can’t fit in with the mob. Until one day her supersensitive style brings her unexpected attention. How will the rest of the mob deal with Annabel now?
Poignant and humorous, this story of a mud-puddle coloured sheep celebrates our uniqueness.
Wombat Press