Book Review - Love Your Sister by Connie and Samuel Johnson

This book was recommended to me by a friend who read it after watching Samuel Johnson’s portrayal of Molly Meldrum in a recent tele-movie. I expected a light-weight, celebrity’s family sob-story. I couldn’t have been more wrong.

When Connie Johnson was diagnosed with a third cancer – this time, incurable -she challenges her brother Samuel to raise money for breast cancer research by riding his unicycle around Australia.
Sam lives with a bi-polar condition that has driven him to alcohol and drug dependency and threatens to destroy family relationships. Connie’s challenge to her brother has a second, and equally pressing motivation - his restored mental stability. It breaks Connie’s heart that she won’t be around to help him get his life in order.

The journal of their partnership in addressing both issues is told from their alternate perspectives, and with their respective personalities coming through clearly and endearingly. There are no false notes from either of them.

With the ‘Love Your Sister’ ride about to start, Connie is nervous about her first-ever radio interview. She says,


“I wondered how I was going to be light, engaging and funny when talking about cancer and death and he (Sam) read my mind. He said, ‘This is about life, it’s about finding meaning in the madness, it’s about making something positive out of something negative, it’s a happy story.’ He was right!”


“I’ve never been the brother to lock arms and say, ‘Well, we’re in this together and off we trot to the hospital.’ …I’ve pretty much embargoed the old cancer chats. I don’t want to chart test results or follow her platelet counts. Never have, never will. It’s too upsetting, because I can’t make her better.”

Sam frequently refers to Henry, who alternatively nags or torments him. The reader eventually learns this is Sam’s alter-ego. Their ironic dialogues are often hilarious.

Although this book is about Connie and Sam’s relationship, the most compelling character for me is Sam and Connie’s father, Joe. Widowed early, he raised his young children with humour, wisdom and considerable self-sacrifice. He comes across as a totally human, totally believable, totally lovely man.

When it all comes together, the unicycle journey is a story in itself – a near-broken man on half a bicycle, pushing himself to the limit for a cause that can’t have a happy ending. Like the circus clown it is associated with, it inspires much love and laughter, yet doesn’t deny the hidden pain.

This was a compelling read. 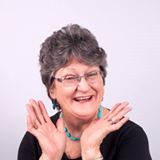