Book Review: The Seafaring Women of the Vera B. by Susan Page Davis and James S Davis 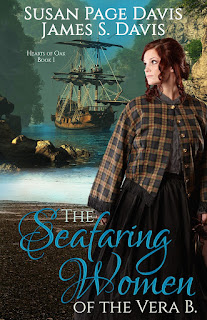 Blurb from back of book.

1854–With the captain dead in Melbourne, Australia, Alice Packard thinks the worst has happened, until she learns the crew has deserted her husband’s ship in favor of the goldfields. Only one old man, Gypsy Deak, sticks by her, but Gypsy alone can’t raise a crew from the depleted population.

In desperation, Alice turns to the only source of plentiful workers: the women of Melbourne. In a bold move, she and Gypsy empty a brothel, promising the escaped women a new life. Her all-woman (save one) crew put their backs and hearts into the voyage, but Alice finds training her sailors much harder than she expected.

Her faith is tested to the limit. With a cargo to sell, angry brothel and tavern owners in pursuit, pirates to evade, and a mysterious stowaway, will the seafaring women of the Vera B. survive to tell the tale of this daring adventure?

Firstly thanks to Susan P Davis for my copy of this book for an honest review.

I was given this book to read due to it starting in Australia and for my opinion of the book. I was in intrigued by the premise and when I started the book I just wanted to keep reading. The book is set during the Australian Gold era and many sailors jumping ship to go gold mining. Which leads the Vera B lacking a crew to return to America. A new strike has taken place at St Arnard which I has memories for me as I remember Mum talking about how my brother took his first steps at a park there.

Looking for crew Alice is finally desperate and takes on women as her crew. Here we have a a variety of women from women escaping life in a brothel and tavern to passengers returning to England after the death of there husband/father.  There is going to be tension between the women which we see play out.

I enjoyed the book partly because I knew many of the places and also because the Australia references were accurate. This for an Australian impressed me that the authors went to the effort to make sure they had the right terms.

I did however get confused at times with all the women and who was who. Some are easy to remember but a few I mixed up at times.

I do need to give a warning there is some violence in the later part of the book due to the issue of pirates. I didn't find it graphic or over done but some people who don't want to read a book with any violence might find this book may find it more than than can handle.

This book is Historical Fiction with a hint of romance.

Overall this is a really good book and I am eagerly awaiting book 2.
Posted by Ausjenny at 05:00