This year, the cross posts between Christian Writers Downunder and Australasian Christian Writers are focussing on the subject of genre. In February, Iola Goulton gave a great overview of the importance of meeting genre expectations. Last month Adam Collings explored the subgenres of space opera and superhero within the science fiction genre. This month, I will be exploring portal fantasy and secondary world fantasy. 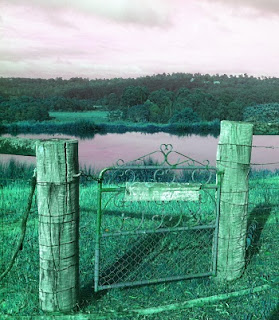 
The fantasy genre covers a wide scope of different subgenres - from stories that include supernatural elements (like the Christmas ghosts in Charles Dickens' The Christmas Carol), talking animals (The Wind in the Willows or Beatrix's Potters' Peter Rabbit), magic and/or mythological creatures such as unicorns, centaurs, mermaids or dragons. It may occur in the past (the 'once upon of time' of most fairy tales), in our present (urban fantasy and many paranormal stories) or occur in an alternate reality (Alice in Wonderland) or an entirely different world separate from our own (like Lewis' Narnia or Tolkien's Middle Earth).

Much of children's literature includes fantastical elements. And while fantasy can be escapist, it often uses analogy and metaphor to explore genuine issues in the real world in subtle and illuminating ways. Maybe because we know this is not the world we live in, we are more willing to explore those issues without the prejudices of our own world.

With the rise of modernism, fairy tales and the fantastical was falling out of favour for a more materialistic approach to literature, especially by the mid-20th century. Arguably, it was the influence of two Christian authors that rebooted the interest in fantasy - C S Lewis with his heart-warming Narnia series and J R R Tolkien with his iconic The Hobbit and its sequel The Lord of the Rings. It just so happens that Lewis wrote a portal fantasy, Tolkien a straight secondary world fantasy.

In portal fantasy, someone from our normal world stumbles upon a 'portal' or door to an alternate reality where fantastical beings, powers and objects exist.  A classic example of a portal fantasy is Alice in Wonderland - when Alice chases the white rabbit down the rabbit hole and finds herself in Wonderland (a place that defines the laws of logic) or The Wizard of Oz (in this case the tornado becomes the portal). Similarly, in The Lion, the Witch and the Wardrobe, Lucy Pevensie hides in a old wardrobe and finds herself in the land of Narnia.

Portal fantasy has been quite popular as it allows the reader to see the strange new world through the eyes of an ordinary person. Imagine Wonderland without Alice. Alice helps the reader discover this strange, contradictory world through her eyes, through her questions, through her confusion. In a way, J K Rowling uses this technique with Harry Potter, who has been brought up in the mundane world with no knowledge of the magical. Portal fantasy keeps a tenuous link between the fantasy world and our own. It is possible to travel between the worlds, and each world may effect and shape the other. The journey to the other world often becomes a journey of self-discovery and heroism.

Some limitations of portal fantasy can its focus on the traveller to the new world than the world itself, and its often linear plot (the hero's quest to return home, for instance, as with the movie version of The Wizard of Oz), but this certainly isn't always the case. For instance, in Anne Hamilton's Daystar, the plot is more complex.

More recent portal fantasy by Australasian Christian authors include Paula Vince's Quenarden series, Anne Hamilton's Merlin's Wood and her award-winning Daystar and also A Swirl of Purple of Jessica Scoullar. One could argue that US author Ted Dekker's The Circle series is portal fantasy (the portal being Thomas' transition between waking and sleeping).

In secondary world fantasy, the world is that is separate or other than our own. (In a way, portal fantasy is a subset of secondary world fantasy - but there is still that connection between the two realities.) Classic examples include Tolkien's Middle Earth (The Silmarillion, The Hobbit, The Lord of the Rings), Ursula Le Guin's Earthsea, Emily Rodda's Deltora Quest or Terry Pratchett's Discworld. The secondary world may be very different to our own (for instance, Discworld) or it may have stronger parallels with our known reality (Tolkien's Middle Earth). Sometimes, it's easy to trace the correspondence between the real and imagined worlds. George R R Martin's Westeros has clear echoes of Eurasia, specifically Great Britain - a popular choice also seen in Patrick Carr's Cast of Stones and John Flanagan's Ranger's Apprentice.  The TV series, Avatar: The Last Airbender and the follow-on, The Legend of Kora echoes Asian cultures (Japanese, Chinese, Tibetan and Inuit).

Good alternative world fantasy makes a strong investment in world building, with many aspects covered (geographical, cultural, political, technological, metaphysical, historical, magical). Plots and themes are often complex and/or epic in scale. They usually blend the strange and astonishing with the familiar, so that the reader has something to relate to.  Perhaps more than any other genre, secondary world fantasy can whisk us away from the ordinary world into a world of wonders. The degree of magic and the tone (uplifting, heroic or cynical, dark or satirical) varies. Westeros is a very different place than Middle Earth.

Some readers can find secondary world fantasy confusing or overwhelming. Sometimes the investment in world building and plot leave characterisation wanting  - though this is obviously not always the case when one remembers Frodo and Sam on Mount Doom, or  the narrative arcs of Ang and Zuko in Avatar: the Last Airbender.

Recent secondary world fantasy by Australasian Christian writers include The Firelight of Heaven by Lisbeth Klein, Brockwell the Brave by Jenny Woolsey, 'The Last Blood Moon' by Charis Joy Jackson,* 'Stone Bearer' by Kirsten Hart,* and my own fiction set in the world of Nardva such as Heart of the Mountain or Lakwi's Lament or 'Ruhanna's Flight'*.

* Found in Glimpses of Light anthology.

Not all fantasy contains epic battles, strange names or sword & sorcery. In fact, most people have read or watched fantasy, maybe without realising it (Peter Rabbit, A Christmas Carol, Alice in Wonderland, The Neverending Story etc). Fantasy (like historical fiction) is a genre in which the place of religion, faith, and the supranational is not usually questioned (though religion is not always presented positively). It also has a great capacity for symbolism, of inspiring the imagination. While I can understand that some people prefer realism (of sorts), I can't help but think they are missing out on something wonderful.

***
I take a more thorough look at fantasy here and here.  This has also been posted on CWD.