From Midnight Sun to Southern Cross:
Those Who Go and Those Who Stay 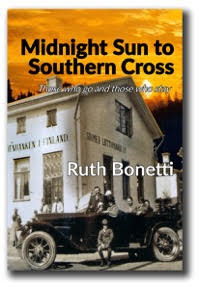 
In the tradition of great family migration stories, Midnight Sun to Southern Cross continues the saga of the Back brothers' flight from Russian occupied Finland to Australia as the nineteenth century turned into the twentieth.

From frozen Finland to the lush rainforests of northern New South Wales, to the dry and dusty sheep country of western Queensland, you follow the highs and lows of their new life under the Southern Cross.

It is an extraordinary tale of success, failure, hard work and dreaming. What drove the wheeler-dealer Wilhelm Anders Back, known as WA, to become in his time Australia's richest Finn? And what stirred his eccentric writerly elder brother Karl Johan, KJ, pacifist and political dissenter? What of those who stayed behind in Finland, and bravely struggled to oust the Russians from their homeland?

This book, and its predecessor, Burn My Letters, are timely in the centenary year of Finnish Independence. WA's granddaughter Ruth contrasts his and KJ's formative years in Finland with her own upbringing in outback Queensland. Her voyage of discovery and self-discovery uncovers research in Finland and Australia, and interweaves her own transformation from shy bush girl to speaker and musician.


Musician, teacher, author, performance coach, Ruth Bonetti is the author of dozens of books including Speak Out Don't Freak Out and Practice in Not a Dirty Word and more recently her historical-memoirs Burn My Letters and Midnight Sun to Southern Cross. Ruth initiated Omega Writers in 1991.

Ruth Bonetti weaves her own story of growing up as a shy, imaginative bush kid in outback Queensland, school in Brisbane, success as a musician, marriage, motherhood and travels to Europe with the story of her grandfather Wilhelm Anders (WA) Back and great-uncle Karl Johan (KJ ) Back settling in Australia and also of the family who stayed in Finland. In Burn My Letters, Ruth focuses on KJ's resistance to Russian oppression of Finland and his flight to Australia. In this second book, Midnight Sun to Southern Cross, Ruth turns to KJ's younger, more pragmatic, forceful and successful brother, WA Back. She also explores the lives of Anna Sanna, who eventually joined her brothers in Australia, and sister Sophia and the youngest brother Edvard and his family, who stayed in Finland to look after their elderly parents.

This is not a dry family history, but a tale of adventure and momentous historical happenings. Ruth brings the past to life with her evocative descriptions, her dialogues and dramatic retellings, her imagined conversations with her ancestors. It is also a personal journey of discovery as Ruth delves deep into lives, emotions and motivations, including her own. She revisits childhood settings, travels on more than one occasion to Finland to meet relatives, discovers newspaper articles, histories, remembered stories and treasure troves of letters and photographs. She sifts through family legends with sources and facts. In many ways, this is also a history of northern New South Wales around the Byron Bay area, of western Queensland and St. Lucia in Brisbane.

I enjoyed both resonating with the familiar and discovering the new. In fact, I was amazed at how many points Ruth's story criss-crossed my life's pathways - from childhoods in outback Queensland (for me Mt Isa, for Ruth near Hughenden), to living within walking distance to each other on Hawken Drive and Highlands Terrace (though not at the same time). So there was much that I met with recognition, even nostalgia (like the long journeys south, visiting relatives and the beaches, periods of separation from parents). On the other hand, I enjoyed learning about Finland and the bitter struggle against their bigger and more aggressive neighbour.

Faith is also part of the weave - sometimes stark, pat, harsh and rigid - but at other times, the strength that sustains, the star that guides, the gentle hope in God's love and grace. It is also a, perhaps timely, reminder of the significant contribution of immigrants (often fleeing strife in their homelands) to our nation. If I'm left with any questions, it's perhaps wishing for a fuller picture of Ruth's own faith and that the few incidental mentions of the local aborigines, the first owners and custodians of the land, left me wanting to know more. Ruth also moves between time periods, often approaching incidents thematically rather than chronologically, yet this is skillfully done and she also provides timelines, a genealogy and plenty of photos, so that I rarely got lost.

Overall, Midnight Sun to Southern Cross is a worthy sequel to Burn My Letters. Enjoyable, engaging and interesting. It would surely be of interest to lovers of memoirs, biographies - or those interested in the history of Queensland and northern New South Wales as well as Finland in the 19th and 20th centuries.

I had the delightful privilege to provide feedback on Midnight Sun to Southern Cross before publication and was surprised and thrilled to receive a free autographed copy at the launch - along with a lovely violet which is now thriving in my garden. Thank you Ruth :) 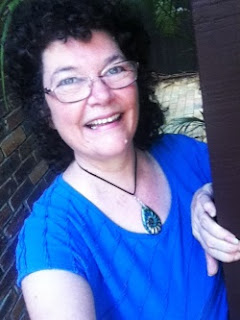 She will be publishing her second novella, Blood Crystal in the next couple of days.