Every week tens of thousands of new books are released onto Amazon. How to get a book seen by readers when you are literally competing with hundreds of thousands of others is a never-ending challenge for authors and publishers. Last month in Part One of my posts on online book advertising I looked at Facebook boosts/ads and GoodReads ads and giveaways. This month I'm going to talk about email promotional lists and Amazon ads :) 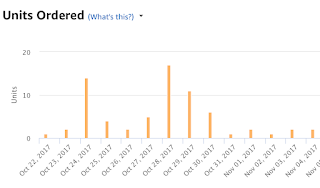 Those of us who are avid readers will probably belong to many email promotional lists that notify readers of cheap books and/or free deals. The most well known is BookBub but there are thousands of smaller genre specific lists. In Christian fiction the most popular include ones like Christian Book Heaven, Spirit Filled eBooks, and Faithful Reads.

Pros: Will get your book cover/description in front of readers who would otherwise never see your book. Pretty much guaranteed to result in at least some sales.
Cons: Can be expensive (a BookBub ad in the Christian fiction category for a $1.99 deal will cost over $500 USD). There is no guarantee you will make your money back in sales.

Since the three month "new release" window for Then There Was You has finished it now just trundles along selling 1-2 eBooks a day. So I decided it was time to try and get it in front of some potential new readers by trying a couple of email promotional lists. Last month I dropped Then There Was You to $1.99 (USD) for a week and ran ads with Spirit Filled Kindle and Christian Book Heaven. As you can see from the graph above, they both definitely had an impact. October 24 was when my ad ran with Spirit Filled eBooks and October 28 was when it ran with Christian Book Heaven.

In both instances they made enough sales to pay for the ad but little more than that. Given the expense of some of the larger lists like Bookbub I would only consider going there if I ever have more than one indie book and there is the chance that I will also benefit from a uptick in sales in my other (non-discounted) titles.

If you've spent any time traveling around Amazon you've no doubt stumbled across "sponsored" product placement. These are almost always either in the list returned from your keyword search or on one of the product placement bars on the page of the book you're looking at.

Their appearance is not random. When an author of publisher sets up an advertisement they can include up to 1, 000 keywords or phrases that they want their word associated with. For me I've got a list of about a hundred comparable authors and titles to my books. But others get a lot more creative than I do!

So for those of you who have ever searched for a Christian book and suddenly found yourselves with an eyeful of a bare chested man wrapped around a voluptuous lady, that was not a mistake by Amazon. For reasons I've never been able work quite a few "steamy" romance writers put things like "Christian romance" in their advertising keywords!

The lingo in the reporting table...

Impressions: The number of times your add has appeared (note - this doesn't mean it's been seen! It could have "appeared" on a list but the browser never scrolled down far enough to actually see it!)
Clicks: The number of times someone has actually "clicked" on your ad
ACPC: Average cost per click. The average of how much it has cost you every time someone clicks on your ad.
Spend: How much your cumulative clicks have cost you
Total Sales: The $ amount of sales you've made as a result of those clicks (it can take up to three days for sales to show up here)

Pros: Unlike GoodReads, you don't have to pay anything upfront. Amazon charges you retrospectively for clicks in your advertisement/s. The keyword reporting is good and allows you to see which keywords are resulting in sales and which ones aren't so you can adjust your "per click" bids accordingly.
Cons: Now that every man and his cowboy have caught onto Amazon ads they are becoming less effective and you are having to be prepared to pay more "per click" just to get your ad somewhere where it can be seen.
Tip!: If you see a book with the tag "sponsored post" while trawling Amazon and the ad really appeals to you you can save the author from having to pay for your "click" but just searching for the book or author directly in the search bar :)

So there you have it, my foray into paid advertising for Then There Was You! So, in a nutshell, my assessment from most effective to least (purely in my experience and bearing in mind that this is my first crack so I'm a total amateur at all of these!)...

And, if you're a reader, tired of being bombarded with ads for books that you have no interest in reading, hopefully this will give you an idea of what authors are up against trying to get their stories in front of anyone who might like them :)

Kara Isaac lives in Wellington, New Zealand. She is the author of Close to You, a RITA Award Double Finalist, and Can't Help Falling, an RT Review Top Pick. Her latest book Then There Was You released in June. When she's not chasing three adorable but spirited little people, she spends her time writing horribly bad first drafts and wishing you could get Double Stuf Oreos in New Zealand. She loves to connect on her website, on Facebook at Kara Isaac - Author and Twitter @KaraIsaac
Posted by Kara Isaac at 05:30

Email ThisBlogThis!Share to TwitterShare to FacebookShare to Pinterest
Labels: advertising, book promotion, Kara Isaac, paid advertising, Then There Was You