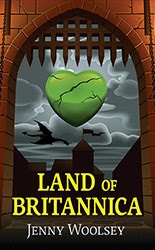 Land of Brittanica by Jenny Woolsey


Twelve-year-old Brittney is upset her parents have split up and she wants them back together. After Dad introduces his girlfriend to Brittney and her brothers, she is plunged into a strange world... the Land of Britannica. This kingdom is ruled by the evil Storm Queen and it is Brittney's mission, as stated in the Book of the Kingdom, to defeat the queen and restore the cracked green heart that hangs in the sky. She must face many perils and dangers. Will Brittney be able to fulfil her destiny?

Land of Britannica is an allegory. Brittney must work through stages of grief as she goes on her mission to save the people.

This is a wonderful story of a brave girl who fights evil for good.

Jenny Woolsey is a writer and blogger, speaker, teacher, youth worker and advocate for people with facial differences, mental illness, and disabilities. She lives in the north of Brisbane, in Queensland, Australia, with her husband, three magnificent children, three spirited cats and her cute fluffy dog.

Jenny started writing stories when she was little. As a teenager, poetry was her favourite genre. In 2014 Jenny decided it was time to begin writing again and published her first novel, Ride High Pineapple. In 2016 she published her second, Brockwell the Brave. Jenny writes to help children and teens who feel different and are going through tough situations. She understands as she's felt this way all through her life.


I enjoyed Jenny Woolsey's debut novel Ride High Pineapple which dealt with difference (the heroine has a congenital face dysmorphia), bullying and being brave with an engaging story. So I was looking forward to reading Land of Britannica. This book was pitched to a younger audience with clear language.

Twelve-year old Brittney is struggling with the separation of her parents, especially when her Dad introduces his new girlfriend. Unable to sleep, she is transported through a strange green portal and finds herself in a kingdom with a cracked green heart hanging in the sky and an evil Storm Queen. The people of the kingdom believe Brittney is the girl from the Book of the Kingdom, who will mend the green heart and save the realm from the Queen.

Brittney must face her fears as she battles trolls, fierce guards and the Queens magic. She receives help along the way, and there are many strange cross-overs between her normal world and this new one, including her companion, a talking cat called Marmalade almost identical to her cat at home.

Land of Britannica follows the well-tried path of hero's journey, with a quest and many difficulties along the way. Britannica is a world with fantastical elements, including an evil stepmother Queen, a fairy, talking animals, and dragons; elements that connect with Brittany's inner battle. There is plenty of action and a satisfying conclusion. All the while, the story explores the confusion for children when their parents separate.

This is a solid middle-grade book, easy to read and full of adventure. The book is written for the general market, though from with Christian values and worldview. Great for kids that might be struggling with family conflict, change and separation or know someone who is.

Available as an e-book on Amazon or as print book from the author's website.
Posted by Jeanette O'Hagan at 05:00