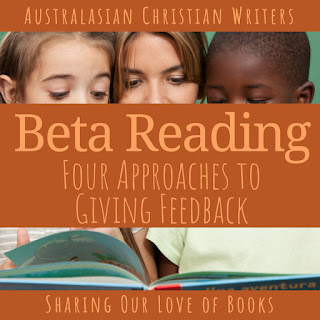 It's an awkward situation. An author friend has asked you to beta-read their book, and you agreed. But it needs work. What do you say?

Personally, I don't think being complimentary is a great idea. The point of a beta read is to find what needs improving in the story—and there is always something that can be improved. It doesn't serve the writer or future paying readers if the beta reader only gives positive feedback ... even if that's what the writer wants. A writer has to be teachable, and someone who only wants compliments but no criticism isn't teachable. And you're not helping the writer grow if you only share the good news.

I had one situation where an author approached me to review their book (I also have a book review blog. It helps me stay up-to-date with trends in Christian fiction). The story showed potential, but the editing was beyond awful—to the point where the novel was actually difficult to read.

I went back to the author and said they appeared to have sent me the unedited version, not the final version. I'd be happy to review the final version, but this version had too many errors for me to read and review fairly, because I'd have to mention the errors in my review.

I'm a freelance editor. It's going to reflect badly on my editing skills if I give a stellar review to a book with obvious plot, character, or editing issues. Anyway, I never heard back from the author. I can only guess this was the final published version (edited or not). I suppose I could have offered the author my editing services, but I don't want to give the impression I review books as a way of soliciting editing work. Because I don't (but if you want to hire me, you can contact me via my website).

Be Complimentary and Critical

One piece of advice I often see is to use the compliment sandwich when giving feedback:
I've heard this is the approach used by Toastmasters: when giving feedback, members have to find two things the speaker has done well for every suggestion for improvement. Employee performance reviews often take this approach.


As a result, I don't use the compliment sandwich.


As a freelance editor, clients are paying me to help them improve their manuscripts. It's not good use of my time or my clients' money for me to spend twice as much time telling them what they're doing well as I spend telling them what needs to improve.

But that's not to say you shouldn't use the compliment sandwich in beta reading. It might be the best approach for you, depending on your relationship with the author in question.

You might think this is easy for me to say. After all, I'm an editor. People are paying me to make their writing better—to criticise. And I'm a reviewer. Publishers offer me ebooks so I can provide an honest review.

But it's not that easy.

I'm told some freelance editors hesitate to criticise, hesitate to "bite the hand that feeds them." (I missed that memo.)


I also know from experience that when some authors say "honest review", they mean "complimentary review". I've seen authors ask for honest reviews, checked out the Kindle sample, and realised the last thing they want is an honest review*. Sure, they need one. But they don't want one.

*For example, the "authors" who can't write a grammatically correct sentence.

But this is where we get to the nuts and bolts of the question: how do you give critical feedback on a beta read?

We'll discuss that next week. Meanwhile, what questions or comments do you have about giving feedback to other writers—especially critical feedback?