Crowdfunding for publication - Part 3 - During your campaign

Welcome to part 3 of Crowdfunding for publication. You can catch up posts here and here.

You've planned your campaign and launched it. Now the work begins.

Most campaigns are a month long, although you can set the time longer or shorter. This means there is a month of asking people to support you. Constant posting of "Support my campaign" on Facebook can get tedious, so you need to get creative.

During your planning process, it helps to have a calendar so you can map out the different promotions you will do. 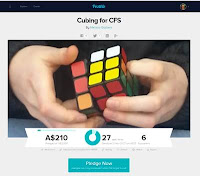 Here are some ideas:

Spread out your message so that you continue to get supporters throughout the whole campaign. Many supporters will pledge in the first week, and again at the end.

Where possible, post updates to your campaign. This will let your supporters know how things are going. Updates could include a cover reveal (if you haven't revealed it already), update on your progress, a snippet of your book, or anything else relevant to your campaign that you want your supporters to know about. Don't go overboard with updates, it's good to have a few planned during the campaign, along with a "We did it" update when your campaign is a success.

During the campaign, remember to pace yourself. It can be exhausting, and you will get to a point around the middle where you will get discouraged, especially if pledges slow down and you feel as though you will never reach your goal. Planning your promotions will help you with this. Also, surround yourself with supporters who will encourage you and keep you going.

Last week, I launched the campaign for my second book. You can support it here. This post is part of my plan for promotion, as well as everything I've listed above.

My next post in this series will be in a couple of weeks and will look at what to do once your campaign is over.

Posted by Melissa Gijsbers at 01:30