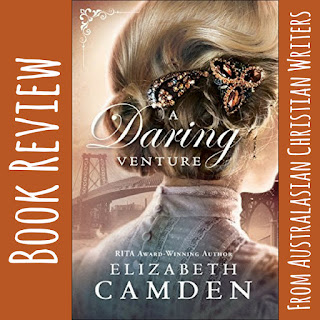 Rosaline Werner lost both her parents to cholera when she was just ten years old. The loss changed her life, but eighteen years later she's back in America, working as a biochemist fighting to eradicate waterborne diseases including typhoid. She's convinced the answer is to chemically treat the city's supply of drinking water with chlorine, but not everyone agrees.

Nicholas Drake is a plumber, and a commissioner of the State Water Board of New York, responsible for ensuring the citizens have access to clean water. But he can't see that adding poison to water is the solution—he prefers the tried-and-true method of filtering the water.


It's a great set-up: two people who want the same thing.

Two people with noble reasons. But two people who fundamentally disagree on the best process, to the point where their factions are fighting it out in court. It's a plot that isn't going to allow for compromise. Rosaline will win, or Nicholas will win. Unless Rosaline can convince Nicholas to change his mind ...

It's also a unique concept for a novel. Plumbing. Water. Dams. Chlorination. Filtration. Most of us in developed countries take safe drinking water for granted, and it's hard to believe that it's only been a little over a century since the idea was mooted, accepted, and popularised. Elizabeth Camden is known for taking little-known and intriguing historical factoids and turning them into compelling historical novels with plenty of romance and more than a little suspense.

The one possible fault with A Daring Venture is that while Elizabeth Camden's earlier novels were definitely Christian, this (and the previous novel in this Empire State series, A Dangerous Legacy) do not have any overtly Christian content. But nor are they general market titles, with all that implies. Perhaps it's that the faith element is woven in so subtly that it's not noticeable.

And in some ways, it shouldn't be. A Daring Venture isn't a faith-based story. It's the story of clean, disease-free water, and some of the people who helped change our world for the better by fighting for what was right. Which, if you think about it, is the outworking of the Christian faith.


A Daring Venture is an excellent novel with a unique premise.

Recommended for fans of historical fiction, especially romances and novels with a basis in historical fact. I hope there will be a sequel, because I want to see more of Nicholas and his growing family.

Thanks to Bethany House and NetGalley for providing a free ebook for review.


About A Daring Venture

As a biochemist in early 1900s New York, Doctor Rosalind Werner has dedicated her life to the crusade against waterborne diseases. She is at the forefront of a groundbreaking technology that will change the way water is delivered to every household in the city--but only if she can get people to believe in her work.

Newly appointed Commissioner of Water for New York, Nicholas Drake is highly skeptical of Rosalind and her team's techniques. When a brewing court case throws him into direct confrontation with her, he is surprised by his reaction to the lovely scientist.

While Rosalind and Nick wage a private war against their own attraction, they stand firmly on opposite sides of a battle that will impact far more than just their own lives. As the controversy grows more public and inflammatory and Rosalind becomes the target of an unknown enemy, the odds stacked against these two rivals swiftly grow more insurmountable with every passing day.


You can find A Daring Venture online at: