By Catherine Hudson and Iola Goulton

We in New Zealand might have had the last conference, and it was certainly the smallest, but there are advantages to size. For example, we were able to speak with most of the presenters. We got to ask the presenter (Flo Nicoll), from Harlequin) to put the slide up again so we can get pictures of ourselves with the book cover featuring our friend Narelle’s August new release: 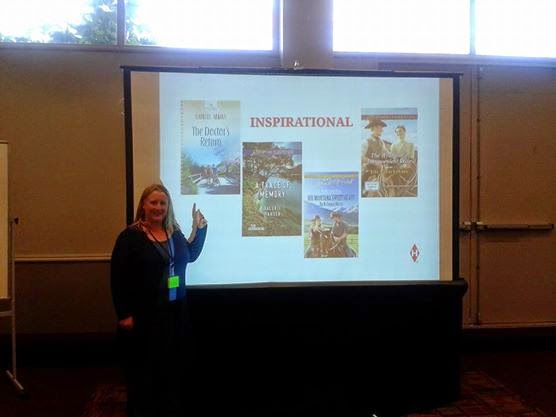 (See The Doctor's Return on the left?)

And we got a photo with the main workshop speaker, James Scott Bell (which is the main reason we were all there!): 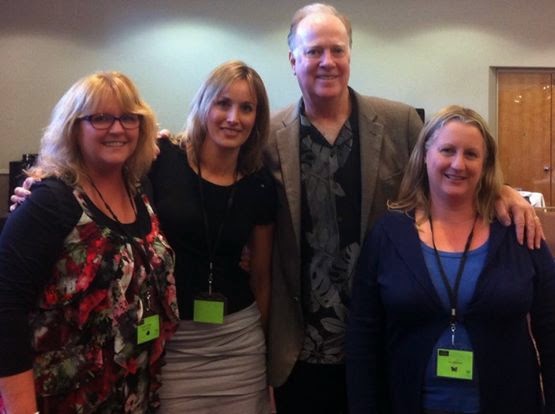 RWNZ was an eye-opening conference. It showed us how much we can learn from authors writing for the general market. They were welcoming, freely sharing their ideas for marketing and craft that resulted in very admirable sales. I know that the content of our books will differ (obviously ‘sex sells’ is not a phrase that applies to those of us who do not intend to include this in our books) but we can certainly learn from those who are making a living wage from writing, across a range of genres.

Going to conference helps keep us up to date with the latest craft techniques (yes, Iola went to the session titled “Making Your Sentences Rock”), and techniques that are selling books. We must not forget that we are creating a product, and that product needs to appeal to readers. Some of us only want to write for the Christian audience, but Catherine in particular was challenged to consider that it may indeed be possible to write books that instil hope, and can cross over to be appealing to a larger market.

James Scott Bell was excellent, clarifying many craft techniques, some that were familiar, and others that were new. This event was an exercise in clarifying our writing goals, craft, genre, and motivations.

Hearing from Jim Azevedo from Smashwords was exciting. The whole world is opening up for writers. While it is still paramount that we produce quality books readers will love, we are now free to get them into the hands of readers without going the way of the gatekeepers of trad publishing. The sales figures were astounding and very encouraging. There has never been a better time to be a writer—particularly of romance. If we are willing to apply ourselves and learn the craft, study what sells, and learn best marketing practices, it is possible to make a decent living as a writer. Just the fact we can get our books into the hands of readers is thrilling—ebooks have overtaken print books in the USA, and the rest of the world is shifting to the new technology.

Catherine says: conference, as usual, was a gauge of how much I have learned in a year—which is important in a career where deadlines are often self-imposed and qualifications are not set by a certain length of time and the approval of those more knowledgeable than us. If I could put one word to the experience it is ‘liberty’. Information is power they say and I feel free to make my own informed decision toward becoming published. It was worth every cent!

Andrea says: RWNZ was amazing. Brilliant speakers—I mean, James Scott Bell!?!— and a wonderfully accepting group of writers to converse with. When asked what I wrote, no one turned a hair when I said 'inspirational romance'. In fact, they were interested and encouraging. The conference was worth every cent.

Iola says: As a freelance editor, it was gratifying to hear successful a self-published author like Marie Force emphasise the importance of honing the craft of writing before publishing, and of the importance of excellence in both editing and cover design. The best sales techniques won’t get you anywhere without the basics of a good product. And, yes, it was worth every cent!

One of the highlights for all of us was the Awards dinner on Saturday night. We had spare seats at our table, and a lady we didn’t know joined us. She asked what we wrote—inspirational romance. And are you published? Andrea replied that she was, with an Australian publisher. It turned out the lady is a Christian, and was wondering if there were any publishers in Australia who were open to Christian work. Well, yes. It shows God can move anywhere … even in a room full of general market romance authors.


What conferences have you been to, or are planning to go to? What was the main thing you learned?
Posted by Iola at 05:00