This post is part of a series illustrating some of the common fiction editing issues I see, using Atlanta Nights by Travis Tea as our example. For those of you who didn’t read my post introducing Travis Tea and his illustrious novel … you might want to go back and read the post.

My previous posts have looked at the opening hook, interior monologue, and point of view. Today we are looking at dialogue.

Good dialogue is important in a novel, because it is often the first thing a potential publisher will look at. Dialogue is one of the hardest things for authors to get right. The temptation is to write dialogue how we speak, but that’s a mistake. Our speech is full of um’s and er’s, small talk and changes of subject, none of which convert well to the page, and none of which point us towards any kind of information on story, character or theme.

Dialogue is not written how people speak: no one wants to read a court transcript.

The dialogue you’re trying to create has to be much more compressed, much more focused than real speech. In effect, dialogue is an artificial creation that sounds natural when you read it. Let’s look at some dialogue from Atlanta Nights, taken from the opening to Chapter Three:


“As you've probably heard Yvonne,” began Penelope Urbain. Seriously brushing a gleaming scarlet tress out of her tearful eye “Bruce has come home from the hospital after his accident.”
“Yes you must be very happy,” said Yvonne sympathetically. “He was badly hurt in that auto accident.”
“Yes he was badly hurt,” responded Penelope honestly. “But he is home now and I am very happy about that.”
“We need to have a very serious discussion about this,” said Yvonne earnestly.
“Yes. We have some very serious things to discuss,” agreed Penelope. 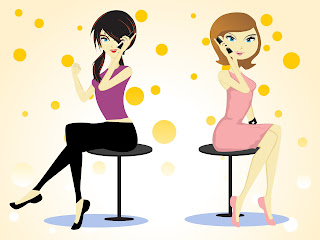 Well, no one is going to accuse this of sounding natural (even if we edit out the typos). So what’s wrong?

If Yvonne has already heard, why is Penelope telling her?

Any time you see (or write) a phrase like “as you know” in dialogue, there are likely to be two problems. First, it is a signal the dialogue is repeating things the characters already know, and the only reason they’d do this (outside of a police station or courtroom) is in order to tell the reader.

Second, it is likely to be out of character—why tell someone what they already know? (Unless your character has an unfortunate personality quirk of continually repeating themselves). It's repetition.

As you can see, Atlanta Nights takes this repetition one step further by having Penelope echo what Yvonne has already said. The only saving grace is that Travis Tea keeps the backstory brief: I read one self-published novel where the author gave two generations of family history whenever she introduced a new character.

And why is Penelope calling Yvonne by name? They obviously have some relationship—they are close enough that Yvonne knows Bruce is out of hospital. Think about the last conversation you had with a friend. Did you call him or her by name? Probably not—it sounds unnatural. We call someone by name if we don’t know them well (partly to help us remember the name!), or to identify someone or attract their attention in a group.

So what would be better?


“Did you hear Bruce was home from hospital?” Penelope asked.

Simple and to the point. However, it could be improved by adding context (information about what else is happening in the room, perhaps through the use of an action beat) or subtext (perhaps through a dialogue cue, something that clues the reader in to Penelope’s state of mind). Good dialogue usually contains as much or even more subtext than it does text. More is going on under the surface than on it. No one would accuse Travis Tea of introducing subtext into this conversation.

The next part of the conversation continues the trend of the two women telling each other what they already know. It’s repetition. It’s redundant. It’s annoying. Very annoying. Particularly the repetition of “very”, which is an empty word (other empty words include just, quite, and really. Think about it: do they really add anything to the sentence? Or are they just filler? Quite often, the sentence would be stronger without the filler words).

Either cut the repetition, or edit it to add subtext and power.


“You must be pleased, said Yvonne sympathetically. “He was badly hurt.” Yvonne’s tone was the perfect blend of sympathy and encouragement. Anyone who didn’t know her would think she cared.
“Yes, and I’m thankful he’s home,” responded Penelope honestly.
“We need to have a serious discussion about this,” said Yvonne earnestly.

Better, but still not good. Why not? Because of the dialogue tags, which will be the subject of my next post.