Don't be a Chump 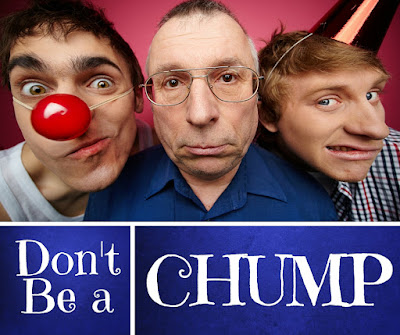 Godin probably didn't intend the post to be a lesson for writers. But it is.

To pull off a significant deception, you generally need two things: A deceiver and a crowd of people open to being deceived.


Unfortunately, writers are open to being deceived. And I think Christian writers are especially susceptible. I think there are several reasons for this:


And that leads to the second part of Godin’s argument:

Once those are present, the deceiver brings out the big lie.

Sadly, there are people and businesses who target these good Christians, these people who are always ready to think the best of others. This leaves a ready market of Christians ready to hear the big lie.

In publishing, this lie is often delivered by a “Christian” vanity press. Because there is a never-ending market of writers:


As with all good lies, there is an element of truth in the message the vanity presses are preaching.


And this is where vanity presses come in. Godin says:

people are open to looking for shortcuts and a new reality, even if no shortcuts are available

As with many things in life, there are no shortcuts in writing and publishing. Sure, print-on-demand technology and the introduction of ereaders and smartphones and tablet computers have made it easier than ever for authors to self-publish (for example, I’m currently reviewing a book written by four pre-teens as a summer project). Amazon and Kobo and iBooks make distribution easy.

Or authors can hold out for a traditional publisher—but that takes time and money, in the form of entering contests and going to conferences to attract the attention of influential agents and editors. For many writers, it’s a seemingly endless cycle of rejection and frustration.

And that frustration can lead us into making bad decisions.


Frustration in the face of the way things are makes us open to the big lie. Frustration and fear and anger can suspend our ability to ask difficult questions, to listen to thoughtful critics, to do our homework.

To be a chump (not merely the victim) is to be open to the big lie. Not merely open to it, eager to buy into it.

And I suspect this is why many people get caught in the clutches of vanity presses.


Because they are eager to get out of the cycle of rejection and frustration and eager to buy into any alternative.

Especially when that alternative tickles their ears, confirming how difficult it is to get a book accepted by a major press but that’s okay because they have an alternative, a third way. Yes, it involves a small investment on the part of the author, but that’s normal. And then your book will be published and available in book stores and you’ll be a real author.

They’ll even tell you how to respond to the naysayers, horrible people like me who say they are nothing more than a vanity press. Because they’re not. They’re a hybrid publisher, a co-publisher, a subsidy publisher, a traditional publisher, a royalty-paying publisher. They’ll convince you black is white, and you’ll believe them.

Don’t be sucked in by the promises of the vanity presses. As Godin says:


We're not chumps. Not if we don't choose to be.

I also write contemporary Christian romance with a Kiwi twist—find out more at www.iolagoulton.com.