Come Fly With Me


Yesterday was a public holiday and a perfect opportunity to sleep in. However, we had friends visiting from the UK who had to catch an early flight. So we stirred out from our comfy beds around 5.30am, and packed them in the car for our trip to the airport. We live in the northern suburbs of Melbourne, and though the trip usually takes 45 minutes in normal traffic, we guessed the traffic would be light, while everyone else took their well-earned sleep-in. In fact, the roads were so clear, we got to the airport in just over 25 minutes. That was good going.

That was yesterday. Today, my husband and I made up for our lost public holiday, and have set off for our annual holiday break. We also had to go to the airport, but our flight was a little later, and we set out in peak peak traffic (the extra peak to indicate it was a really bad idea to set out at this time). All school mum’s were on the road, all office workers, and apparently that time of day is the best time for road workers to throw up speed reduction signs, and cut lanes so that oncoming traffic must wait about five minutes while the other side goes through at snail’s pace. 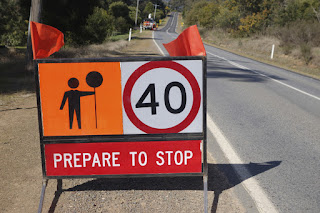 As we set out, we realised this was the worst time to take this trip. Our driver elected to skip the main arterial road that would have taken us to the freeway. We agreed, given the reputation for this road—often referred to as the carpark during peak times. We have used the back route many times before, knowing there is only one traffic light before coming to the freeway, and crossing through a lot of farm land. However, during the last year, the farmer who owned this farm land has bought a private jet, a private yacht and a private island. He’s sold it all off to developers, and the developers are hard at it, ripping everything up, with lots of heavy equipment, and those blessed traffic control people, in their hi-viz vests, holding up stop signs everywhere. The farmer and the developer are getting on with the job, but the local council didn’t receive the memo. The population explosion in these areas has meant a massive increase in traffic, and we are still travelling on one lane roads, with road-works every time you manage to get a speed up.

We finally got to the freeway and—Wheeee—we got a speed up to 100kmph. And then it started to slow and stop. What!!!! Angst increases another couple of notches. You know those airlines are not the most sympathetic to folks who arrive forty-five seconds after they have shut the gate.

So we discussed yet another route, from an exit coming up. As we approached the exit, we saw that everyone had the same idea, and the traffic queue was ridiculous. We elected to continue on the freeway at a pace that rivalled the tortoise. Eventually we passed a bingle (a little road accident). Those folks looked more angsty than even we felt, with the front end and fender of their vehicles pushed into a mangled shape. I had half a thought of stopping to offer help, but given our pending departure time, I soon banished the thought, and trusted that emergency services would find their way through eventually.

So during this 60 minute trip to the airport, I began to think about this blog. I thought about the many options we had, and the discussions that went on about which route to take, and the frustration to find that each option seemed to yield another difficulty. And while you might find this story amusing (or not) I have a point. 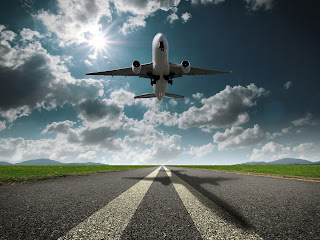 As writers we hope to reach a destination like an airport. After all the work we put into our creative projects we hope to drop them off at a place where they will be able to fly—where the work will go to other places and bring hope, encouragement, inspiration and entertainment to readers and viewers. Sometimes we set out at a really good time, like when I set out twenty years ago, and the roads were clear, and the travelling easy. My work got to the destination – the Australian Christian Book market – and it flew.

But in recent times, with all the changes in the publishing industry, the roads are full of obstacles, challenges and discouragements. I sometimes sit in my slow-moving vehicle and wonder: is there a better route? Should I write screenplay? Should I write contemporary instead of historical fiction? Should I write for the mainstream instead of the Christian market? Should I give up and go home? I’ll be honest with you: these are questions I consider all the time. I’m trying to find my way to the freeway, and in turn, to the airport, where my creative work can connect with a vehicle that can make it fly, but which road to choose. And has everyone else already sussed this route out, and it is now clogged and difficult to get through?

Is this how you feel sometimes? I imagine I am not the only one who has felt frustrated, and has considered the above questions, especially the giving up option. If it wasn’t that I enjoyed writing so much, I would have stopped by now.

I do have these questions before the Lord in prayer. I have my ear inclined in his direction, hoping to recognise a clear sign, knowing the travelling will be light. I haven’t had any ‘writing on the wall’ moments just yet, so I will continue to write and continue to wait and listen. I’m still having fun in the writing process, if nothing else. I do hope to share my new work with readers one day, and I hope that your creative project will make its way to the airport and begin to fly too.

Meredith Resce is the current president of Omega Writers Australasia.
She has published nineteen titles in the last twenty years, the most recent release is the novella ‘Falling for Maddie Grace’.