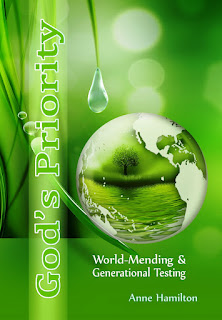 This is the fifth book in the multi-award winning series which began with God's Poetry and continued with God’s Panoply, God’s Pageantry and God’s Pottery.

As previously, it emphasises the forgotten aspects of Scripture to do with name covenants and threshold covenants. This volume focuses on what happens after we manage to cross the threshold. Although it relies on the understanding of covenant outlined in the previous books, it is largely stand alone.

If ever there’s a time to expect the unexpected, it’s the moment we finally ‘pass over’ the threshold stone. Waiting for us is a test.

And it's not any old test. Abraham, on cutting a threshold covenant with God, had to re-do precisely the same test he’d failed down to Egypt. When he failed again, the test passed down—with eerie exactitude—to his son Isaac.

‘Do you trust Me now?’ is God’s question on the far side of the threshold.
When we’re there, the tests our forebears failed might be waiting for us. But, as Jesus shows, trusting God doesn’t have to be an extravagant show. We're called to 'mend the world' but, as He demonstrates on the road to Emmaus, it's simple, unpretentious, one-to-one actions that matter.

A missing uncle, a scary aunt and a basement full of the creeps …
Archie gets more than he bargained for when he stays with Aunt Ruth. Her spiky white hair looks like it’s been through a storm. She puts things in her stews like devil’s beard and eye of newt. But worst of all, Aunt Ruth has a dark, creepy basement at the bottom of the stairs!
When Uncle Jock goes missing, Archie just knows Aunt Ruth is behind it. But to prove it, Archie may have to go down into the basement …

Plain Jane O’Reilly is good at being unnoticed. Detested by her stepmother and teased by her stepsisters, Jane has learned the art of avoiding attention. That is until Price Moreland, an American with big dreams, arrives in her small town.

Does she dare to hope someone might notice her?

However, Price Moreland may not be the prince that the whole town thinks him to be. Was his desire to be a missionary a God-given call, or just a good excuse to run from his past?

Complete with an evil stepmother, a missing shoe and a grand ball, Unnoticed takes the time-old Cinderella fairy tale and gives it an Australian twist.