Just a few years after their father’s business scandal shatters their lives, Jane and Celia Woodward find themselves forced out of their San Francisco tea shop. The last thing Jane wants is to leave their beloved shop on Valencia Street, but when Celia insists on a move to Austin, Texas, the sisters pack up their kid sister Margot and Jane’s tea plants, determined to start over yet again. But life in Austin isn’t all sweet tea and breakfast tacos. Their unusual living situation is challenging and unspoken words begin to fester between Jane and Celia. When Jane meets and falls for up-and-coming musician Sean Willis, the chasm grows deeper. While Sean seems to charm everyone in his path, one person is immune – retired Marine Captain Callum Beckett. Callum never meant to leave the military, but the twin losses of his father and his left leg have returned him to the place he least expected—Texas.  In this modern spin on the Austen classic, Sense and Sensibility, the Woodward sisters must contend with new ingredients in unfamiliar kitchens, a dash of heartbreak, and the fragile hope that maybe home isn't so far away.

Anyone who knows me knows I’m a big fan of Jane Austen and Austen adaptations, so when this book began getting some buzz I had to buy it to check it out. Jane of Austin is Sense and Sensibility set in contemporary Austin, Texas, and for those of you familiar with Elinor and Marianne Dashwood’s tale, you will enjoy seeing the nods to Austen’s original story.

I found the plot intriguing, the characters engaging (although I’m starting to wonder just how many wounded war veterans need to be glamorised as leads in romantic stories – where are the office workers and accountants?), and the use of recipes and the mention of various teas interesting. For a novel marketed as Christian I was surprised when I finished reading how few references to Christian activity I could recall, apart from the occasional prayer. It was enough to make me wonder about the ‘vanilla-isation’ of books marketed as Christian books to a Christian market, when there is little to distinguish it from a clean secular novel. Not that I’m necessarily advocating the incorporation of sermons, and do I understand this falls into the ‘rom-com’ category, but a little more wrestling with faith would be nice to see from Christian characters.

All in all, I enjoyed this book, and if you're looking for a modern adaptation of a Jane Austen classic, then you will probably enjoy it also. 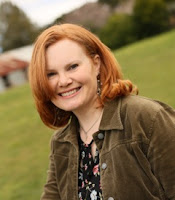 Carolyn Miller lives in the beautiful Southern Highlands of New South Wales, Australia, with her husband and four children. A longtime lover of romance, especially that of the Regency era, Carolyn holds a BA in English Literature, and loves drawing readers into fictional worlds that show the truth of God’s grace in our lives. Her Regency novel 'The Elusive Miss Ellison' released in the US in February 2017, and is available at Amazon.com.au, Koorong and Book Depository, and her second novel ‘The Captivating Lady Charlotte’ released June 27 and  is available now.
Connect with her:
www.carolynmillerauthor.com/
www.facebook.com/CarolynMillerAuthor/
twitter.com/CarolynMAuthor
www.pinterest.com/camillering
Amazon