Book Review: The Man He Never Was by James L. Rubart 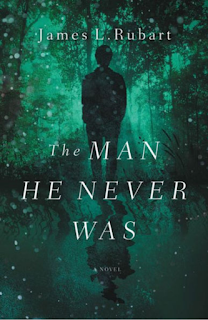 
What if You Woke up One Morning and the Darkest Parts of Yourself Were Gone?
Toren Daniels vanished eight months back, and his wife and kids have moved on—with more than a little relief. Toren was a good man but carried a raging temper that often exploded without warning. So when he shows up on their doorstep out of the blue, they’re shocked to see him alive. But more shocked to see he’s changed. Radically.
His anger is gone. He’s oddly patient. Kind. Fun. The man he always wanted to be. Toren has no clue where he’s been but knows he’s been utterly transformed. He focuses on three things: Finding out where he’s been. Finding out how it happened. And winning back his family.
But then shards of his old self start to rise from deep inside—like the man kicked out of the NFL for his fury—and Toren must face the supreme battle of his life.
In this fresh take on the classic Dr. Jekyll and Mr. Hyde, James L. Rubart explores the war between the good and evil within each of us—and one man’s only chance to overcome the greatest divide of the soul.
REVIEW

Toren Daniels wakes up in a strange hotel. Alone and without any possessions. And short term memory loss.

But he remembers he's married, with 2 kids and where he lives. So he goes home, only to discover he's been gone 8 months, presumed dead. His family are shocked by his reappearance as they've moved on. And don't want him to come back home.

Very quickly he remembers why. Well bits of it anyway. Enough to know he'd made their lives hell since being kicked out of the NFL for anger management issues. He's determined to discover where he's been for the past 8 months and why all of a sudden he seems to have a handle on his anger. And why is an old school 'friend' he hasn't seen in 20-odd years suddenly reappeared in his life?

Using the timeless theme of the Stevenson classic story: Dr Jekyll and Mr Hyde as background Rubart weaves a wonderful tale of self-discovery of exploring the good and evil within each of us. And how we can claim victory over the evil or Mr Hyde-part of our personality.

I so enjoyed how Rubart addressed the theme in story. This is powerful story-telling and be great to see more novels fowling a similar bent of exploring how the Holy Spirit can indeed transform us from the inside out. The fruit of the Spirit of Galatians 2:22-23 is indeed available to us but only through the transforming work of the Holy Spirit as Romans 12:2 outlines.

Like all Rubart novels there's a bit of supernatural activity that can appear a little weird and out of place, however, in the context of the transformative power of the Holy Spirit he probably didn't have any other choice in being able to show the change in Toren's personality in such a short period of time. Something drastic did have to occur. In reality, it's unlikely that engrained habits can be transformed in such a short period of time. But, hey, this is fiction.

Toren and his estranged wife, Sloane, were excellent characters. There were some tremendous scenes featuring the two of them that showed the juxtaposition between what they once had, their current state and the possibility of a new improved version.

As an aside, I was reading this novel while I was on a 5 day retreat where I was studying and practicing models of personal transformation and it was fabulous to read something fictional that demonstrated the power of transformation. I'm sure this was part of the reason I so enjoyed the story and in particular, the themes Rubart addresses in it.

Ian Acheson is an author and strategy consultant based in Sydney. Ian's first novel of speculative fiction, Angelguard was recognised with the 2014 Selah Award for Speculative Fiction.You can find more about Angelguard at Ian's website, on his author Facebook page and Twitter
Posted by Ian A at 04:00