Book Review | The Truth About Love by Nerys Leigh 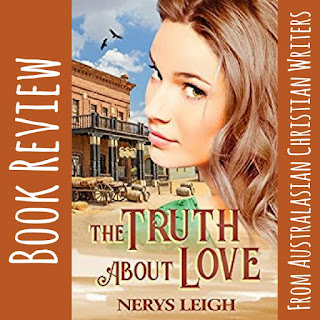 Nerys Leigh's Escape to the West series is unique.

All the books run concurrently, which means the stories can be read in any order as none comes first. Each book follows one of five women who have come west to California as a mail-order bride. The Truth About Love is the fifth book in the series. 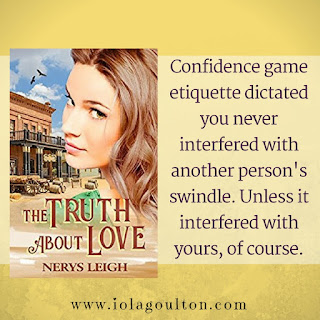 Josephine Carter finds herself pregnant and alone when her confidence game partner abandons her, absconding with all their money. Now she has to complete the ultimate con: get married, and convince her new husband the baby is his. She can't do that in New York, so she signs up to be a mail order bride.

But things don't go according to plan.

She's soon alone again. Now she has to fend for herself in her new home, and find a way to support herself and her impending baby. She is befriended and helped by Zach Parsons, who works at the local hotel. He's attractive, but she's married ... and pregnant. And Zach's a man, and she's done with men. After all, it was men who got her into this predicament ...

Zach is attracted to Jo, despite knowing she's pregnant and not a Christian.

She's a challenge, in more ways than one. She's fiery, independent, intelligent, opinionated. And he's falling for her.

I've enjoyed all the books in this series, and The Truth About Love was no exception. None of the stories have easy matches, but this has perhaps the most for both characters to overcome—Jo especially. She has to overcome her mistrust of men and place her faith in God. Zach is the perfect hero—strong, loving, and forgiving in he shows the way we are all called to love others.

The only downside to The Truth About Love is that we've now had all five stories from the mail order brides, and I don't want to leave Green Hill Creek. It must be time for Pastor Jones to organise another trainload of brides!

Thanks to the author for providing a free ebook for review.

Nerys Leigh writes thoroughly romantic Christian historical love stories. She loves heroes who are strong but sweet and heroines who are willing to fight for the life they want.

She’s from the UK, which you would think puts her in a unique position to not write about mail order brides in the American west, but the old adage of writing what you know has never appealed to her. She has an actual American read each book before publishing to make sure she hasn’t gone all English on it.

No One’s Bride is the first in the Escape to the West series which tells the stories of a group of women willing to travel across America to find happiness, and the men determined to win their hearts.

Nerys can be found relaxing and generally enjoying the view at http://nerysleigh.com and https://www.facebook.com/NerysLeigh.

Email ThisBlogThis!Share to TwitterShare to FacebookShare to Pinterest
Labels: Book Review, Escape to the West, Iola Goulton, Nerys Leigh, The Truth About Love