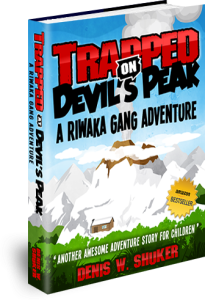 Publisher’s Blurb: The second book in this series features gripping action in the mountains as The Riwaka Gang get involved in another rip-roaring, high octane adventure. This time they battle with the powers of nature in a story that will leave you gasping for air! The four children need all their mountaineering skills and a ton of faith, against incredible odds in the rugged mountains of New Zealand in the South Pacific. Will they survive—with the odds stacked so high against them? You won’t want to miss this next adventure of The Riwaka Gang.

I’ve never grown out of enjoying a good kids’ story. The prospect of a fast-paced improbable adventure, sparkling with innocence and edged with danger, is part of the tantalising lure. The other part is the appeal of a happy ending.

Some people might think these two attractions add up to escapism. But on the first, I’m reminded of GK Chesterton’s thought: ‘Truth, of course, must of necessity be stranger than fiction, for we have made fiction to suit ourselves.’ Even the most improbable tale is usually less stranger than real life and, if for you it isn’t, then you need to get out more.

And on the second, I’m reminded of the happiest of all happy-ever-afters: you’ll find it lurking in John 21, amongst other places. Real life should have a fairytale quality, rather than the slow decline accompanied by the quiet desperation described by Thoreau.

If all this is way too philosophical an introduction for Trapped on Devil’s Peak—A Riwaka Gang Adventure, hey, rest easy. It isn’t like that in the book. This is a fun romp about a group of kids who start their holiday hiking up a ‘dormant’ volcano.

Well, I have to say my Kiwi cousins obviously have a different definition of ‘dormant’ to mine. From the start, author Denis Shuker describes a mountain I’d class as ‘mildly active’ but I’m prepared to be ‘edjumacated’ on the finer technical points of NZ mountains.

The Riwaka Gang start their holiday with a hike up Devil’s Peak, intending to stay overnight in a high altitude cabin owned by Rangi’s uncle.

Jackson has a sense of foreboding from the start and his unease is not helped by mysterious sounds in the middle of the night—groaning and chains rattling. The old ghost stories about a long–dead miner haunting the cabin prey on his mind.

Next morning Rangi claims to have heard nothing. Jackson is in the process of dismissing the sounds as his over–active imagination when Sam asks if anyone heard strange noises in the night. After some investigation, a concealed trapdoor is discovered. It leads down into a dark shaft belonging to an old gold mine.

The gang start to explore, only to discover a girl, tied up and gagged. She’s Sally Wong, a famous young Chinese ballerina who is being held for ransom. The gang had already heard about her kidnapping on the news. They’ve barely rescued her when the thugs who abducted her arrive to check on their captive.
The gang is all captured. It quickly becomes clear the thugs will not have the slightest compunction in shooting them, if they resist. Their vicious leader, Scarface, wants to cut off one of Sally’s ears and send it to her parents in order to motivate them to pay the ransom money without further delay.

Can the Riwaka Gang escape? Can they get Sally out as well?

With a snowstorm coming and the ‘dormant’ volcano rumbling, it seems that if they don’t die one way, they’ll die the other.

A rollicking modern adventure sprinkled with a slight old-fashioned style, mainly because of its omniscient viewpoint. It has a huge dollop of charm and lots of fun dialogue. Whenever danger strikes, the Riwaka Gang are ready on the one hand with a prayer and on the other with a wise–crack.

And just a small spoiler: yep, as expected, Trapped on Devil’s Peak does have the obligatory happy ending. 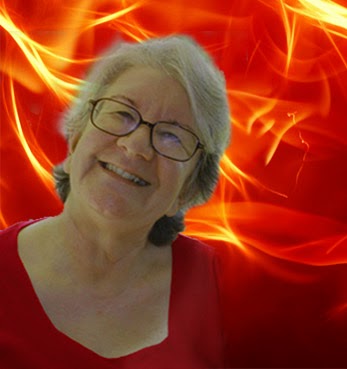 Anne Hamilton is the author of eleven books. Her children’s books include Merlin’s Wood, Many Coloured Realm and Terry—The Adventures of a Terek Sandpiper. Her website is Fire of Roses.
Posted by Iola at 05:00