Tsu (pronounced "sue") is a new social network, launched in October 2014 with a unique proposition: 90% of advertising revenue is returned to users based on how much ad revenue their content makes for the site.

It’s currently invitation-only, although it's not difficult to get an invitation--all you have to do is visit the site via a member's link (like www.tsu.co/iolagoulton). I suspect this is a way of creating and managing early demand. It’s not a new idea: Pinterest had a similar gate when it was first launched.

As you can see, Tsu has a similar look and feel to Facebook, just in green (apparently, Facebook is blue because Mark Zuckerberg is red/green colour blind). Tsu has most of the same functionality, including the ability to use hashtags, and a mobile app. It has some points of difference other than the advertising revenue payments.


There are some limits, which I suspect are to reduce spam: 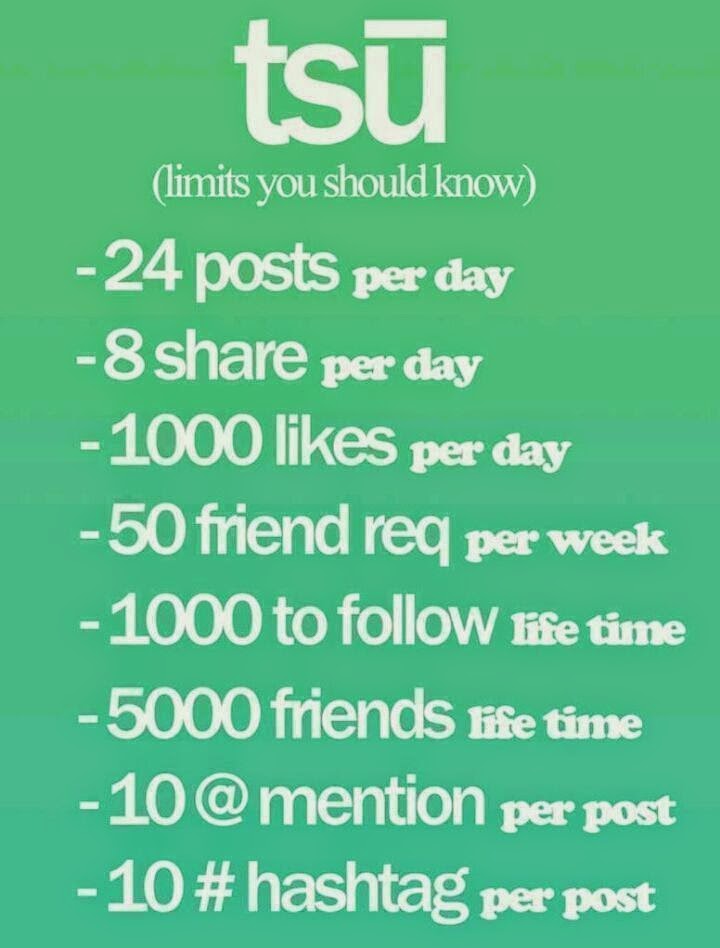 Authors might find the 5,000-friend limit limiting (although Facebook also has a 5,000-friend limit for personal pages). However, users can Follow without friending (as in a Facebook fan page, or on Twitter), and Tsu actually recommends users only befriend people they "know or want to know".

Advertising revenue is shared between the actual content creator and the chain who invited him or her, in what they call the "rule of infinite thirds" (mathematicians will observe the figures below don't add to 100%. I assume the remaining 0.7% is shared with people further up the family tree). 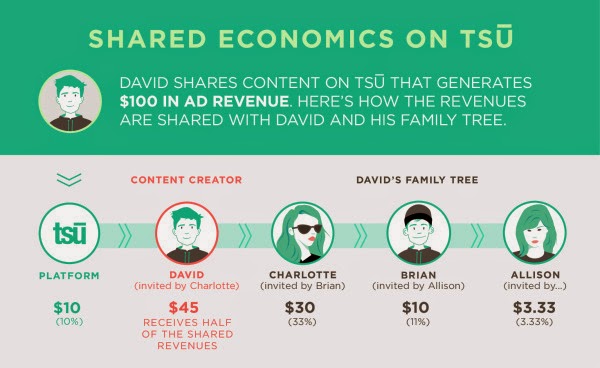 Detractors say it is little more than an online multi-level marketing scheme (because people earn not only from their own accounts but from the accounts of their ‘children’), and that it’s not true engagement if people are engaging merely to get paid or help others get paid.

Is it worth it for an author to join Tsu?

It’s hard to say at this point. The advantage is the potential to earn some money, but only if you or your 'children' post content that generates ad revenue (and how do you do that?). One disadvantage is that it’s another network to learn, and with all social networks, the return you get—social or monetary—is likely to be proportional to the effort you put in.

The other disadvantage is there are no statistics about who is on Tsu, because it’s so new. It seems to be mostly tech-savvy early adopters, although I’ve seen a lot of Australian authors there (although not Christian authors, yet). Having said that, I haven’t looked hard—but I get the impression that most people are connecting with people they are already connected to, via Facebook or Twitter. If that's the case, is there any point in joining Tsu?

The objective of any marketing effort, including social networking, is to connect with readers: specifically, those who read in the genre you write.

Writers in other genres—such as high-tech thrillers or certain non-fiction topics—might find an audience on Tsu. It's early days, so it's hard to tell.

Should you Tsu? Ask yourself my new pet question, and be honest:


WIBBOW: Would I Be Better Off Writing?


These questions are valid for any social network. If it’s going to be a time-waster that doesn’t contribute to your long-term marketing strategy or help others in any way, it’s probably better not to add another social media network to your diary.

What do you think? Do you see any advantages in joining Tsu?

I love reading, and read and review around 150 Christian books each year on my blog. I'm a Top 25 Reviewer at Christian Book, in the Top 1% of reviewers at Goodreads, and have an Amazon Reviewer Rank that floats around 2000.