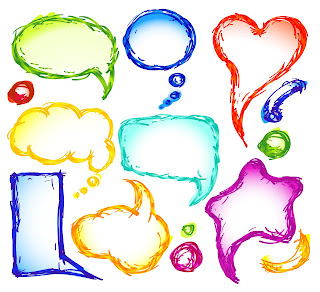 This post is part of a series illustrating some of the common fiction editing issues I see, using Atlanta Nights by Travis Tea as our example. For those of you who didn’t read my post introducing Travis Tea and his illustrious novel … you might want to go back and read the post. It will explain why I have no fear of upsetting the author with my critique.

My previous posts have looked at the opening hook, interior monologue, point of view and dialogue. Today we are looking at dialogue tags, which can also be referred to as speaker attributions: how the author shows the reader which character is speaking. Let’s see how Travis Tea deals with dialogue tags in the passage we looked at last time:

“As you've probably heard Yvonne,” began Penelope Urbain. Seriously brushing a gleaming scarlet tress out of her tearful eye “Bruce has come home from the hospital after his accident.”

“Yes you must be very happy,” said Yvonne sympathetically. “He was badly hurt in that auto accident.”

“Yes he was badly hurt,” responded Penelope honestly. “But he is home now and I am very happy about that.”

“We need to have a very serious discussion about this,” said Yvonne earnestly.“Yes. We have some very serious things to discuss,” agreed Penelope.

Now she sounded earnest, even genuine, but what was there to discuss?


Yes, the dialogue needs work (as previously discussed), but it’s made worse by the speaker attributions. Here are some tips to making your dialogue tags look professional (all quotations are from Chapter Five of Self-Editing for Fiction Writers by Renni Browne and Dave King, Second Edition, Harper, 2004. If you don’t own it … you should.).

When you’re writing speaker attributions the right verb is nearly always said. Verbs other than said tend to draw attention away from the dialogue.

The logical exceptions are asked for questions and whispered or shouted for a character who is whispering or shouting.

Creative speaker attributions are often trying to explain the dialogue, describing the dialogue when that explanation should be in the actual dialogue, in the action, or in the interior monologue. It’s telling when you should be showing. (Of course, if you write dialogue like Travis Tea, drawing attention away from the dialogue could be a good thing.)

Don’t use dialogue tags to explain the dialogue

It’s repetition to say “began Penelope”, which makes it redundant. These are the opening words of the chapter: of course she’s beginning (as an aside, you can probably delete any instance of characters starting to or beginning to throughout your manuscript. To misquote Yoda, do not merely begin. Do. If the character is interrupted, that will become obvious--we don’t need to be told).

Avoid using adverbs in your speaker attributions (e.g. sympathetically, earnestly), as these are, again, telling what should have already been shown:


Too many fiction writers pepper their dialogue with –ly’s … which is a good reason to cut virtually every one you write. Ly adverbs almost always catch the writer in the act of explaining dialogue—smuggling emotions into speaker attributions that belong in the dialogue itself. Again, if your dialogue doesn’t need the props, putting the props in will make it seem weak even when it isn’t.


For example, “earnestly” is unnecessary because “serious” has already cued the reader in:

“We need to have a very serious discussion about this,” said Yvonne earnestly.

Place the character’s name or pronoun first in a speaker attribution (“Penelope said”). Reversing the two (“said Penelope”), though often done, is less professional. It has a slightly old-fashioned, first-grade reader flavour… after all, “said he” fell out of favor sometime during the Taft administration.
For reference, William Howard Taft was President of the USA between 1909 and 1913, so unless your book is set in the 1800’s …

Don't feel you have to have a speaker attribution. Yes, "said x/said y"soon gets tired, and sometimes the best option is no dialogue tag.If it's clear who is speaking (as in this exchange between Penelope and Yvonne), you can safely leave tags off some of the dialogue.


So here is the updated version:

“You must be pleased," Yvonne said. “He was badly hurt.” Yvonne’s tone was the perfect blend of sympathy and encouragement. Anyone who didn’t know her would think she cared.
“Yes, and I’m thankful he’s home,” Penelope said.
“We need to have a serious discussion about this."


Getting the dialogue tags right is straightforward, and makes your work look more professional. And don’t feel you have to use dialogue tags all the time. Vary your writing by including action beats and dialogue cues … which I’ll talk about in my next post.