I review on my blog, and copy the reviews to other sites such as Goodreads, Amazon, Christian Book Distributors, Koorong Books, and Riffle. I also share a lot of my reviews on social media—Facebook, Google+, Pinterest … and Twitter.

And when I share a book I loved, I want the author to know about it.

That’s not me being egotistical. It’s me being practical: authors love reviews, especially positive reviews. It encourages them:

But I want them writing, not stalking Amazon and book blogs looking for reviews. So when I post a review to Twitter, I like to tag them in the review so I can be sure they’ll see it when they do check. It also brings my review to the attention of other people looking at the author’s Twitter feed. 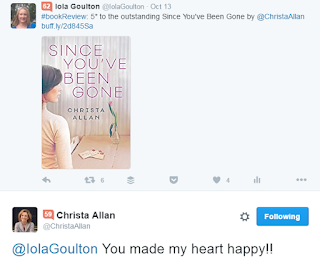 An author will often share my tweeted review, potentially bringing it to the attention of more readers. Well, why wouldn’t they? They want reviews, especially positive reviews. They want their current and potential readers to know about those reviews, in the hope that will influence more people to buy their book. This is a biblical principle:

If I say something about myself, it's not valid. If you say it, it is ... especially if someone else agrees with you.

There’s even an internet buzzword for it: user-generated content (or UGC).

That’s a simple way of saying they author (the producer) gets shareable content (Tweet, book review, meme) from users (me). Because me (or you) saying something positive about a book is more powerful than the author saying it herself. Or himself.

To plagiarise Jane Austen, it is a truth universally acknowledged that authors hate promoting themselves.


Fine. I get that. But that’s not a good reason to avoid Twitter. It means you’re thinking about it the wrong way. Instead of thinking of Twitter as another social media network you have to be on to promote yourself, think of it like this:

Doesn’t that sound better? Pay it forward. Be relentlessly helpful. Make social media about other people, not you.

Some authors aren’t on Twitter because they think it’s going to be a lot of work. It’s not (or if it is, you’re doing it wrong). There are heaps of free (and paid) tools that will help you manage your Twitter account. I’ll be back next week to talk about some of my favourite tools.

Meanwhile, if you’re not on Twitter, why don’t you head over there and set up an account?